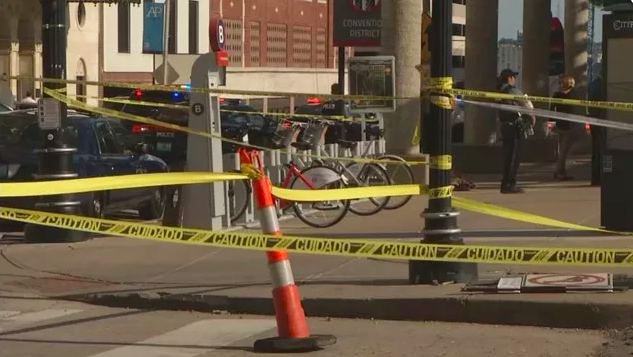 KANSAS CITY, Mo. — Three people are dead after a pair of officer-involved shootings in Kansas City on Thursday, reports CBS affiliate KCTV. All of the officers involved in the shootings are on paid leave as each incident is investigated.

The first shooting involved a woman with a sword who police say barricaded herself inside the shed of a Northland home she had broken into.

The woman's name hasn't been released.

Officers say the standoff began at about 1:18 p.m. at a home near Russell Road and Jackson Avenue. Police surrounded the shed and placed a nearby day care on lockdown as a precaution. Negotiators reportedly tried to get the woman to drop the weapon and come out safely but she refused.

"Often times we are faced with a lethal force situation, which is unfortunately how this ended," said Colon. "We had to take action to ensure the safety of the general public and the officers themselves."

According to KCTV, the couple who owns the home was not there when the woman broke into their house. Their alarm system alerted them someone had entered their back door.

"The alarm went off so police were able to get here before we did," Gabrielle Person said.

When officers arrived, they say they saw the woman carrying a sword.

"It's a surreal situation because someone's in your house," Robert Person said. "She came in and she had a knife and then possibly from there left our house and we have a decorative sword."

Robert and Gabrielle are thankful they were not home to encounter the woman.

"If we hadn't had that alarm he might have come home to feed the cats and been there with her," Gabrielle Person said. "That would have been terrible."

KCTV reports that the second shooting took the lives of two men who police say were fighting over a gun and a golf cart in downtown Kansas City.

Officers were called to the Barney Allis Plaza just before 5:15 p.m. in response to a disturbance. According to the station, at some point police had to use deadly force, killing both individuals.

Madison Wolf and her co-workers watched police from their high-rise office immediately after the shots were fired.

"Right when I got to the window, the police were rushing over ... to where two bodies seemed to be on the ground," Madison Wolf said. "This is a place where we, literally all my co-workers, we frequent down here all the time."

Christi Harper was one in a large group of teachers from across the country gathered at the Convention Center in Kansas City to read AP exams. Being so close to the shooting, they were ushered to the basement for about 15 minutes before getting the all-clear.

"I don't think I was scared or nervous during the whole situation," Harper said. "It was all very calm."

Colon and the department released a statement Thursday evening:

"It is a dangerous calling to be an officer. KCPD understands the concern when deadly force is used. We study the science behind its use. We train accordingly over and over again to thoroughly prepare ourselves. The KCPD knows the public wants to know more about today's events. We are working diligently and professionally to gather additional facts. We will provide more information as soon as it's confirmed."