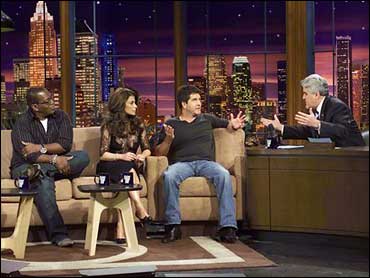 After stranding 14 runners through 11 innings, the San Diego Padres finally had a bounce go their way.

Vaughn opened the 12th with a single off Dennis Reyes (0-2), and Joyner followed with a hit to center that bounced over Cedeno's glove for a two-base error.

"I hit one off the end of the bat that had a little English on it, and I thought it was going to fall in for a base hit," Joyner said. "When it did fall in, it took an immediate right and got past the center fielder, and Vaughny just kept running and he scored."

The nine-game winning streak is the third-longest in the Padres' 30-year history. The two-game sweep completed their first-ever 8-0 homestand.

"You need those breaks every once in a while when you get eight or nine or 10 in a row," Joyner said. "I think we're very confident. We're not overconfident. I think we're relaxed about the way we're playing."

Said Dodgers manager Bill Russell: "When you're going good, you get stuff like that happening."

Cedeno said he didn't have a chance on the ball. "It hit the ground and went away. That's the only way I can miss the ball. I just wanted to get the ball one hop to stop the runner from going to third base."

Trevor Hoffman (3-0) struck out three in two innings for the win.

The Dodgers had runners on second and third in the 11th inning, but Hoffman struck out rookie Alex Cora to end the threat.

San Diego loaded the bases in the fourth, sixth and eighth innings, but failed to break the 2-2 tie.

The Dodgers walked 10 and hit one Padres batter, none of whom scored. Four Padres pitchers combined for 15 strikeouts and three walks.

After going 500 at-bats in between homers, San Diego's Quilvio Veras connected for the second time in three games, hitting a leadoff shot to right off Ismael Valdes in the first for a 1-0 lead.

The Dodgers took the lead 2-1 on Juan Castro's two-run homer off Sterling Hitchcock, the second of the season and his career.

San Diego tied it in the bottom of the second when Chris Gomez doubled with two outs to score Carlos Hernandez from first.

The Padres loaded the bases on three straight walks off Valdes opening the fourth, but failed to score. Hernandez, a former Dodger who hit a three-run double in Tuesday night's 10-6 win, forced Ken Caminiti at home, and Gomez hit into a double play.

Hitchcock settled down afteCastro's homer, allowing just one single the next five innings and retiring the last 11 batters he faced. He gave up two runs and five hits in six innings, struck out five and walked one.

Notes: The crowd of 35,765 pushed the Padres' season attendance to 1,030,679. ... Raul Mondesi left the game after the top of the sixth with a sprained left ankle sustained when he crashed face-first into the padded fence in center field after making an over-the-shoulder catch of Tony Gwynn's fly ball in the third. He held up the ball for the umpires to see, then was tended to by the team training staff. ... The main entrance to Qualcomm Stadium was closed Wednesday as X Games workers finish preparing the street luge course, which will end in the stadium parking lot. ... The Padres' longest winning streak was 11 from April 14-27, 1982. They had a 10-gamer from July 25-Aug. 4, 1978.