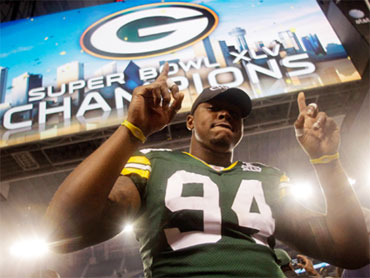 Capping one of the greatest postseasons for any quarterback, Rodgers led the Packers to their first NFL championship in 14 years Sunday, 31-25 over the Pittsburgh Steelers. The Packers reclaimed the Vince Lombardi Trophy, named for their legendary coach who won the first two Super Bowls and is making his own star turn in New York these days in the play named after him.

Rodgers, the game's MVP, thrilled his legion of Cheesehead fans with a spectacular six-game string that should finally erase the bitterness of the Brett Favre separation in Green Bay. He's now equal with Favre in Super Bowl wins, and he extended the Packers' record of NFL titles to 13, nine before the Super Bowl era.

"It's what I dreamt about as a little kid watching Joe Montana and Steve Young," Rodgers said, "and we just won the Super Bowl."

The Packers QB threw for three touchdowns, two to Greg Jennings, and the Packers (14-6) overcame even more injuries, building a 21-3 lead, then hanging on to become the second No. 6 seed to win the championship. Coincidentally, the 2005 Steelers were the other.

Rodgers threw for 304 yards, including a 29-yard touchdown to Jordy Nelson, who had nine catches for 140 yards to make up for three big drops. Rodgers found Jennings, normally his favorite target, for 21- and 8-yard scores.

"Wow! It's a great day to be great, baby," Jennings said.

Then the favored Packers held on as Pittsburgh (14-5) stormed back.

"We've been a team that's overcome adversity all year," Jennings said, who noted injuries to Charles Woodson and Donald Driver. "Our head captain goes down, emotional in the locker room. Our No. 1 receiver goes down, more emotions are going, flying in the locker room. But we find a way to bottle it up and exert it all out here on the field."

Few teams have been as resourceful as these Packers, who couldn't wait to touch the trophy honoring their greatest coach - and their title. Several of them kissed it as Cowboys great Roger Staubach walked through a line of green and gold.

"Vince Lombardi is coming back to Green Bay," NFL Commissioner Roger Goodell said as the silver prize was handed to the team.

After sitting for three seasons, Rodgers took the Packers to two late-season victories just to make the playoffs as a wild card. Then he guided them to wins at Philadelphia, Atlanta and archrival Chicago before his biggest achievement - against a Pittsburgh team ranked second in defense.

They barely survived a sensational rally by the Steelers, who still own the most Super Bowl rings - six in eight tries. But Pittsburgh failed to get its third championship in six years with quarterback Ben Roethlisberger. Roethlisberger's season began with a four-game suspension for violating the NFL's personal conduct policy. It ended with Roethlisberger standing on the sideline, his head down, hands on his hips, feeling something he never experienced: defeat in a Super Bowl.

"I feel like I let the city of Pittsburgh down, the fans, my coaches and my teammates," Roethlisberger said, "and it's not a good feeling."

Not even a decidedly black-and-gold crowd, with Terrible Towels swirling throughout the $1.2 billion stadium, could make a difference for the mistake-prone Steelers. Their two biggest defensive stars - Defensive Player of the Year safety Troy Polamalu and outside linebacker James Harrison - were virtually invisible. The offense didn't seem to miss outstanding rookie center Maurkice Pouncey, who was out with an ankle injury, but Roethlisberger only occasionally made key plays until the second half.

The biggest plays were left to Rodgers, Nick Collins with a 37-yard interception return for a TD, Jennings, Nelson, and the rest of the guys in green and gold. In the end, they gave coach Mike McCarthy his first Super Bowl victory against the team he rooted for while growing up in Pittsburgh. Besides Lombardi, Mike Holmgren won a title in 1997 with Favre.

"This is a great group of men here, a lot of character," Rodgers said. "We went through a lot together."

Even on Sunday, they did. Woodson went out late in the first half with a collarbone injury, a few plays after Driver was sidelined with an ankle problem.

"It was very difficult to watch," Woodson said, "but it feels good now."

Woodson saw the Steelers, who rallied from a 21-7 halftime hole against Baltimore three weeks ago, show the same resilience. A 37-yard catch and run by Antwaan Randle El - an almost forgotten figure during his return season with just 22 receptions - sparked a quick 77-yard drive. Hines Ward, the 2006 Super Bowl MVP, had 39 yards on three catches during the series, including an 8-yard TD when he completely fooled Jarrett Bush.

A quick defensive stop and a 50-yard drive to Rashard Mendenhall's 8-yard touchdown run made it 21-17. But with Pittsburgh driving for perhaps its first lead of the game, Mendenhall was stripped at the Green Bay 33 by Clay Matthews - one of the few plays the All-Pro linebacker made. The Packers recovered, and Rodgers hit Jennings for 8 yards and the winning points.

Pittsburgh's last gasp was on a 25-yard touchdown pass to Mike Wallace and a brilliant pitchout by Roethlisberger to Randle El for a 2-point conversion.

Mason Crosby added a 23-yard field goal for the Packers and the Steelers had no more comebacks in them.

"You play to be world champions," Matthews said, "and that's what we are today."