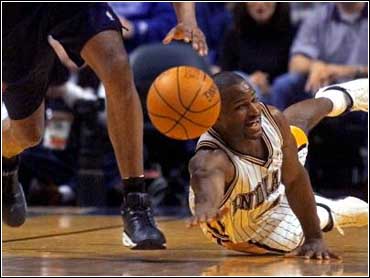 Jalen Rose keeps rolling along, carrying the Indiana Pacers with him.

Rose scored 29 points as Indiana beat Golden State 104-88 on Saturday night, extending the Pacers' franchise-record home winning streak to 22 games. He has averaged 23 points in the last 12 games to help the Pacers to a 10-2 mark.

"This is a welcome addition," said Reggie Miller, who has led the Pacers in scoring 10 consecutive seasons. "It takes so much pressure off of me, and when he's going to be struggling, he's going to be looking at me. It's a great tandem to play off of."

Rose didn't miss a shot in the first half, hitting seven attempts from the field and three free throws as Indiana pulled ahead to stay. Rose, who has reached 20 points in 11 of his last 12 games, finished 11-for-19 and made all six of his free throws.

"Jalen did a good job in the first half, then he scored some baskets that gave us a bigger lead in the fourth quarter," Indiana coach Larry Bird said. "He's shooting better and he has been more patient on offense."

"He just keeps getting better," Pacers guard Mark Jackson said of Rose. "He's a legitimate scorer. He takes so much pressure off the rest of the guys."

Golden State stayed close until late in the third quarter, mainly on the strength of its offensive rebounding. Donyell Marshall had a career-high 23 rebounds, nine on the offensive end.

"We're not a good rebounding team. That's just the way it is," Bird said. "It worries me, but what can you do about it. We practice it every day, we work on it. It will cost us down the line."

Golden State outrebounded the Pacers 58-40, the most against Indiana this season.

Marshall's layup with 4:44 left in the third qurter left Golden State trailing 66-60. The Pacers then pulled away with 10-4 run to close the period. Rik Smits had three free throws in the run and Miller, who scored 15 points, hit a 3-pointer to send the Pacers into the fourth quarter leading 76-64.

Indiana, which hasn't lost at home since Nov. 25 and has a league-best 25-2 mark at home, never let Golden State pull with 11 points again.

Larry Hughes led the Warriors with 24 points, and Marshall scored 16, but he was 5-of-19 from the field. Erick Dampier also had a double-double for Golden State with 15 points and 16 rebounds.

"They played smarter and harder than we did. They had an answer for everything we had," Marshall said.

"We rebounded terrific, but our turnovers (18) and our inability to make shots (37.5 percent) cost us," Warriors coach Garry St. Jean said. "I'm not disappointed in our effort, but our decision making and shot making were the nemesis tonight."

Indiana cleared its bench early in the fourth quarter and all 12 players who got into the game scored. Al Harrington had 11 points in just 11 minutes.

Indiana led by 15 points three times in the second quarter, the last at 50-35 on a jumper by Harrington with 3:12 left. However, Golden State rallied to cut it the deficit to nine, 52-43, at halftime. A 29-17 advantage off the boards, including 10 offensive rebounds, helped the Warriors overcome 13 first-half turnovers.