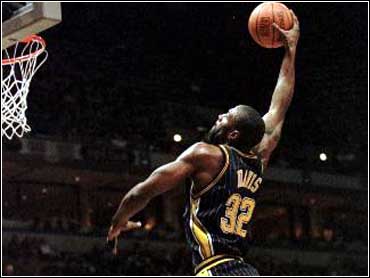 George Karl wants the Milwaukee Bucks to get more respect. Mark Jackson showed him how respect is earned.

Indiana led the entire game until Sam Cassell's driving layup with 1:12 to play gave Milwaukee a 90-89 lead. After the teams exchanged misses, Reggie Miller muscled into the lane and kicked the ball to a wide-open Jackson, who drained the 3-pointer.

"We don't panic," said Jackson, who missed his first seven shots but hit his last four, including three 3-pointers. "You can't put us in a situation we haven't seen. ... I like the feeling of getting on a plane and knowing I hit the shot to win a game."

The Bucks inbounded at midcourt, but Glenn Robinson was called for traveling with 3.3 seconds left. Indiana ran out the clock for its eighth victory in nine games.

Karl didn't like the traveling call, and he didn't like Miller's aggressive drive into Cassell on the previous play. He also didn't like the 28-20 foul differential or Indiana's 34-20 advantage in free throws.

"I didn't think we got any respect in the last few minutes," the Bucks coach said. "We didn't get much respect all night. ... We probably have to win some playoff games, some playoff series (to get respect)."

A fan threw a plastic cup full of beer at two officials when the call was made against Robinson, and the game was delayed while the floor was cleaned and the fan ejected.

"That was a first," Miller laughed. "This is the beer capital of the world, right?"

Milwaukee's Bradley Center funk continued as the Bucks' home record felto 14-11, easily the worst among the NBA's 16 teams with winning overall records. The Bucks lost to Toronto, Portland and New York in a five-day span before the All-Star break.

Not even the loss of center Rik Smits, who was scratched from the starting lineup because of a sore lower back, could stop the Pacers from beating Milwaukee for the 12th time in 13 meetings. Indiana has roared back from the All-Star break with wins over Central Division foes Toronto and Milwaukee.

"Coming back from the break and playing this well is surprising," Indiana coach Larry Bird said. "We look like we haven't missed a beat."

Jackson had 11 points, nine rebounds and nine assists. Miller had 23 points while taunting Bucks fans during the game, and Jalen Rose added 20.

Austin Croshere replaced Smits in the starting lineup and had 16 points and nine rebounds, while the team made up for Smits' defensive absence with suffocating defense on the Bucks' Big Three.

Robinson, Ray Allen and Cassell were a combined 22-of-52 from the field, and Milwaukee got just 27 points from the rest of its roster.

Robinson also thought he was fouled on the Bucks' final possession.

"There was a lot of contact," he said. "It was just a lack of respect. There were a lot of calls that were missed."

Cassell led the Bucks with 23 points and nine rebounds. Robinson had 22, including nine in the fourth quarter, but also had four turnovers and just four rebounds in 39 minutes of play. Allen, who was limited by foul trouble, added 18 points.

Indiana's lead stretched to 12 points in the third quarter, but the Bucks pulled within 73-71 on Cassell's turnaround jumper with 8:48 to play. With 4:16 left, Ervin Johnson's rebound basket tied the game at 80.