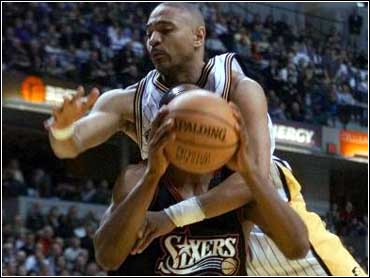 Four years ago, Larry Brown coached the Pacers to a franchise record 17 consecutive victories at home. On Monday night, he was an unwilling spectator as Indiana broke the record by defeating Philadelphia 109-84.

"They were great," Brown said of the Pacers, who shot 54 percent, outrebounded the 76ers 43-39 and blocked 12 shots. "They shot well and defended well."

Reggie Miller overcame a slow start to score a season-high 32 points despite sitting out the fourth quarter, and the Pacers limited Allen Iverson to just 14.

Iverson, who matched his career high with 50 points Sunday in a 119-108 triumph over Sacramento, made only 6-of-19 shots.

"Naturally the emphasis was to stop him and make sure he didn't get easy looks at the basket. I thought we did a great job of swarming to the ball each time he put it on the floor," said Travis Best, one of four Indiana guards that helped hold the league scoring leader 17 points below his average.

"Guys really kept a hand in his face and made it tough on him."

Iverson declined to credit the Pacers for their defensive effort.

"The only person who could stop me is myself. I made some bad shots early and had some bad judgments," added Iverson, who often had Miller defending him with help from teammates.

"Reggie has played good defense as long as I've been watching the league. He's an All-Star. What can I say, he played well," Iverson said.

It was Indiana's 12th consecutive home triumph over Philadelphia, including two playoff games last year when the Pacers swept the 76ers in four games. Philadelphia's last victory at Indiana came on Nov. 24, 1993, the first of four years that Brown coached the Pacers.

"That's as well as we've played in a long time at both ends," said Indiana coach Larry Bird. "We did a good job f getting helps early. It seemed like we always had two guys there to help. The other night I talked about how selfish we were in Orlando and tonight was the opposite. When we're like that, we're one of the best teams in the league."

Jalen Rose, who spent much of Brown's final season at Indiana on the bench, contributed 20 points to the victory.

Miller had his first four shots blocked before finding his range to score 21 in the first half, including three of his five 3-pointers.

Theo Ratliff led Philadelphia in scoring for the first time this season with 16.

Indiana, undefeated at home since Nov. 25, used a 20-2 run to take the lead for good. Miller's first 3-pointer began the run with 2:15 left in the first quarter and Indiana trailing 22-14.

The basket ignited a nine-point burst by Indiana and the quarter ended with Philadelphia leading 24-23 following a layup by Matt Geiger.

Indiana then pulled away by scoring the first 10 points of the second quarter while the 76ers missed their first four shots and had an offensive foul called on another possession.

The Pacers were up 62-44 at the break, having enjoyed their most productive second quarter of the season. Indiana shot 82.4 percent from the field (14-of-17) and made all eight of its free throws in the period.

Indiana went on to take a 25-point lead in the third period, and Philadelphia never drew closer than 17.