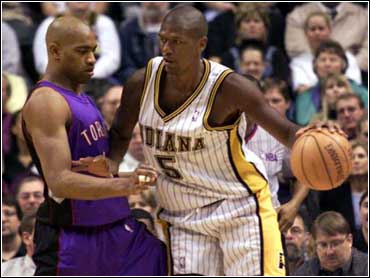 Jalen Rose, playing his first game in a week, scored a career-high 32 points, 23 in the first half, as the Indiana Pacers beat Toronto 109-101 on Wednesday night for their 19th straight home victory.

While teammates Reggie Miller and Dale Davis were in Oakland, Calif., for the All-Star game, Rose went on vacation to Mexico.

"I wanted to get away from the game, lay out and just breathe," he said. "I wanted to get my mind right. I'd be lying to say every player doesn't want to be part of the All-Star weekend. But I had a great break. A lot of guys did. We got a lot of rest."

The Pacers seemed to have the game in control after a 14-1 run in the first quarter and led by as many as 22 points late in the second period. But Vince Carter, held to four points in the first half, had 11 in the third quarter as Toronto got back into the game.

"I just had to suck it up and try to contribute in the second half," Carter said. "I just continued to shoot the ball and do the things I needed to do to help the team come back and fell a little short. They had a little too much firepower for us tonight."

A 3-point play by Carter pulled the Raptors within 75-66 midway through the third period, then two more baskets by Carter cut the lead to 91-86 early in the final quarter.

Rose, whose previous high was 28 points, re-entered the game with under eight minutes left and scored the next five points on a 3-pointer and another basket off one of Mark Jackson's 15 assists.

"Jalen is the best-kept secret in the league," Jackson said. "He has a lot of weapons and knows how to use them. He will be a great basketball player."

Two baskets by Antonio Davis, a former Pacers forward who finished with 17 points and 13 rebounds, pulled the Raptors within five before two baskets by Dale Davis. Rose scored the final points on two free throws with 18 seconds to go.

Rose, who was guarded by Carter, hit his first six shots and finished 12-for-23.

"He wanted to show Vince how good he was, and he did it," Raptors coach Butch Carter said.

"They are the team to beat in the East. They wanted to make a statement that we couldn't be as good as they are, and they did."

Vince Carter finished with 21 points and Tracy McGrady added 20 for the Raptors. Austin Croshere had 15 for Indiana and Davis and Jackson added 13 apiece.

"We made a mistake by letting them back in the game, but we played well," Pacers coach Larry Bird said. "Other than the start of the second half, I thought we played pretty well. We looked a little rusty in the fourth quarter."

The game was close at the start, but two straight fast-break baskets by Rose off assists by Jackson put Indiana up 18-10, starting the Pacers' big first-quarter run. A 3-pointer from midcourt by Miller at the buzzer gave Indiana a 40-24 lead at the end of the first period.

Rose had 14 in the first quarter and 20 points before he took his first rest halfway through the second period. By that time, Indiana's lead was 17 points, and the Pacers stretched it to 68-46 before a basket by Kevin Willis cut the lead to 20 at halftime.