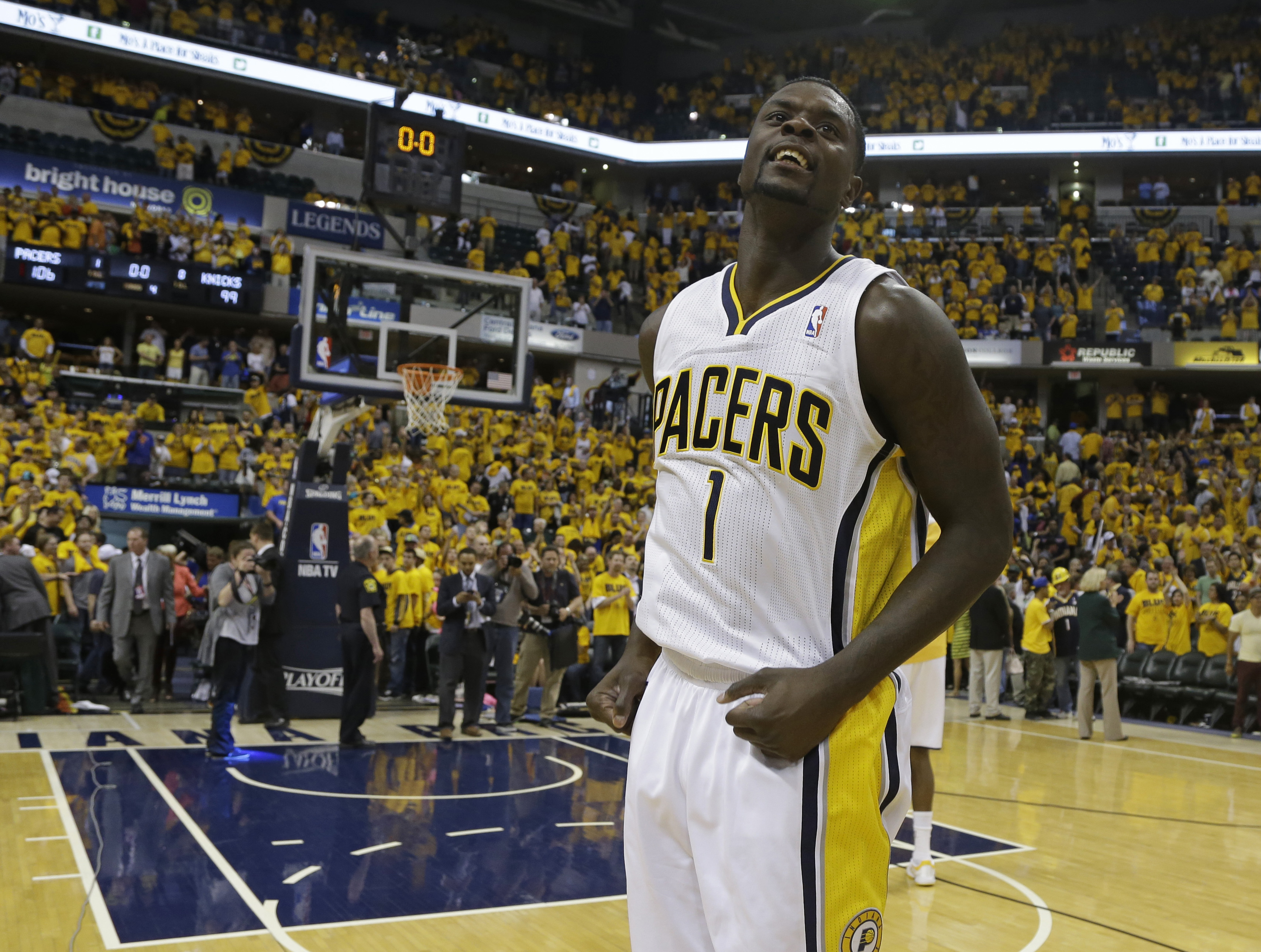 INDIANAPOLIS Lance Stephenson scored nine of his playoff career-high 23 points during a late 11-2 run Saturday night, leading the Indiana Pacers past the New York Knicks, 106-99 and into the Eastern Conference finals for the first time since 2004.

The New York native also had 10 rebounds and the Pacers were spurred by the return of point guard George Hill two days after he was diagnosed with a concussion.

Next up is a rematch with Miami, the team that eliminated Indiana last season. Game 1 will be Wednesday at Miami.

Indiana is 6-0 at home in the playoffs, but this one sure wasn't easy.

Indiana trailed 92-90 with 5:43 left in the game. The Pacers rallied after Roy Hibbert blocked Anthony's dunk attempt and Stephenson scored on a layup that started the decisive spurt.

The big question coming into the game was whether Hill could return after missing Game 5 with a concussion. He did, and it certainly made a difference as the Pacers reverted to their brand of basketball.

They limited New York to 40 percent shooting, had a 43-36 rebounding advantage, committed 10 fewer turnovers than in Game 5 and again protected their home court.

New York played better than it had in the first five games of the series, making 13 of 30 3-pointers and fought valiantly after leading only once, 3-2, in the first half.

It just wasn't enough with Hill back in the lineup and the screaming fans urging the Pacers on.

Indiana gave the Knicks chances. The Pacers blew 10-point leads in the second and third quarters and after controlling most of the game suddenly found themselves playing catch-up in the fourth quarter when Chris Copeland made back-to-back 3-pointers to give New York an 89-86 lead with 9:01 to play. J.R. Smith's next 3 made it 92-90.

That's when Hibbert changed the game as Anthony drove in for a 1-handed dunk attempt. Hibbert stuffed him clean, Paul George grabbed the rebound and Stephenson tied the score with a layup at the other end. Stephenson followed that with a steal and coast-to-coast layup, made two more free throws, and after David West scored on a tip-in, Stephenson scored on another layup to make it 101-95.

The Knicks never got another chance to tie the score or take the lead.

George had 23 points and West finished with 17. Hill was just 2 of 10 from the field in his return but scored 12 points, had five rebounds and four assists.

Notes: New York failed to become the ninth team to rally from a 3-1 deficit. ... Indianapolis 500 pole winner Ed Carpenter made the short trip from the track to Bankers Life Fieldhouse, where he is a regular attendee. ... Colts coach Chuck Pagano also attended the game. ... The Knicks were 18 of 18 from the free throw line.