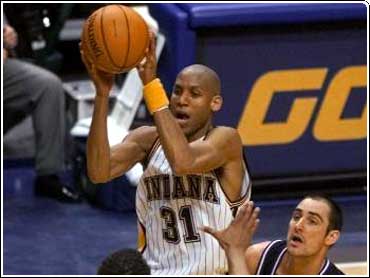 The Indiana Pacers are making themselves right at home in the new Conseco Fieldhouse.

Mark Jackson had a triple-double and Indiana had five players in double figures as the Pacers beat Sacramento 104-94 on Friday night to tie the club record of 17 consecutive home victories.

"The guys really stepped up. It was just an excellent, excellent job by everybody. It doesn't make a difference if you're short-handed or not, you've got to win here," said Jackson, who had 15 points, 15 assists and 10 rebounds despite sitting out the fourth quarter.

The Pacers, who haven't lost at home since Nov. 25, kept the streak going despite losing All-Star forward Dale Davis with a broken nose late in the second quarter.

"It was a typical game when two good teams play against each other. I always remember playing against the Pacers, good physical games. That's good for our club too," said Sacramento's Vlade Divac, who had 17 points and 14 rebounds.

"We turned the ball over a couple of times in the fourth quarter ... and they hit a lot of free throws."

The Pacers, who lead the league in free-throw accuracy, made 24-of-27 free throws.

Jalen Rose led the Pacers with 22 points and Rik Smits had 18. Chris Webber topped the Kings with 26 points on 10-of-22 shooting.

Indiana's Reggie Miller had 14 points, including a key 3-pointer and jumper on two successive possessions in the final minutes that helped hold off the Kings. He was 2-of-14 from the field until that point.

"This really shows the rest of te league we can throw a lot of different combinations at you," Miller said. "I was upset because I had so many great looks. I had easy and wide open shots. You have to keep shooting. I knew sooner or later I was going to put the dagger in."

Davis had helped limit Webber to eight points on 4-of-13 shooting until the Indiana forward caught an inadvertent elbow from Nick Anderson with 1:20 left in the half.

Miller followed with a jumper from just inside the arc.

Webber capitalized on the absence of Davis to score 14 in the third period when Sacramento took an eight-point lead.

Chris Mullin's 3-pointer with 9:22 left gave the Pacers the lead for good at 78-75. Indiana held off the Kings with the help of 11 free throws in the final eight minutes.

Indiana also helped itself by outrebounding the Kings 55-43, including 10 by Derrick McKey who played 26 minutes in the absence of Davis. It was only his second game after being on the injured list for the team's first 43 games.