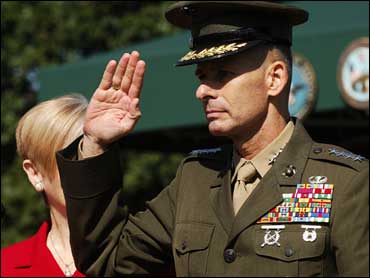 Marine Corps Gen. Peter Pace was sworn in Friday as chairman of the Joint Chiefs of Staff, becoming the first Marine to hold the nation's highest military post.

Pace succeeded Air Force Gen. Richard B. Myers, who retired after 40 years of military service, including two years as vice chairman of the Joint Chiefs and four years as the chairman.

At a retirement ceremony on this ceremonial post adjacent to Arlington National Cemetery in Virginia, President Bush and Defense Secretary Donald H. Rumsfeld thanked Myers for his service. Mr. Bush noted that Myers became chairman just weeks after the Sept. 11, 2001 terrorist attacks and oversaw the invasions of Afghanistan and Iraq.

"He helped design a broad and innovative military strategy to win the war on terror," Mr. Bush said. "His leadership and flexibility were essential to the liberation of Iraq, and to adapting our tactics to defeat the terrorists and help Iraqis build a peaceful democracy."

Mr. Bush also praised Pace, saying he looked forward to working with him.

Pace is haunted by the war in Vietnam (video)
and gives the fallen soldiers with whom he served credit for getting him to where he is today. On his desk he keeps a snapshot of Corporal Guido Farinaro, who died following Pace's orders — a constant reminder of the human cost of war.

Pace told Martin that he owes his life to another soldier.

Martin reports that Pace admits that one of his nicknames is "Perfect Pete" – but he says that doesn't mean he's a goodie two shoes.

"I'm a Marine General," he says. "How could any human being in the universe become a general officer in the United States Marine Corps and not have an edge?"

The Joint Chiefs chairman, by law, is the senior military adviser to the president and the secretary of defense. He commands no troops and is not in the formal chain of command, which extends from the president to the defense secretary to combatant commanders.

Pace, who was born in Brooklyn, New York, and raised in Teaneck, New Jersey, had served the past four years as vice chairman of the Joint Chiefs. He was the first Marine to hold that position and also is the first to be chairman.