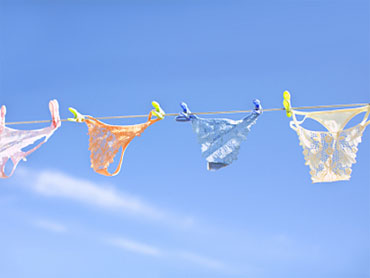 (CBS) NORTH STRABANE, Pa. - A man whose wife had gotten a protection order against him was arrested Wednesday after he allegedly punched her, stole her underwear and scattered it along a highway, reports CBS Pittsburgh.

James Klutch, 54, is charged with simple assault and violating the order of protection his wife had filed for the day before.

According to Officer Jonathan Miles, Klutch returned to their home around 11 p.m. Tuesday, and when his wife found him, "there was some kind of an exchange happening and she says he punched her which caused her to lose her breath."

Klutch then reportedly left the home, taking the entire contents of his wife's underwear drawer with him, CBS Pittsburgh reported.

At 5:40 a.m. Wednesday, he was back trying to get into the home while throwing underwear in the street outside. Sometime in those early morning hours, he spread the underwear along the highway.

"He returned and tried to get inside the residence but left and was apprehended a short distance later," Officer Miles said.

Klutch, who police say admitted that he threw his wife's underwear to get back at her, remains in custody.