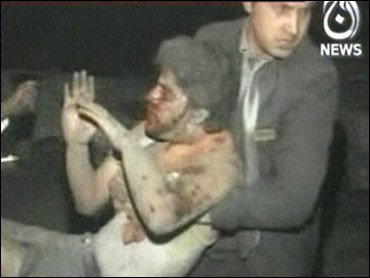 With its breezy opening song and retro-style graphics, CBS News Correspondent Hattie Kauffman reports, "The Osbournes" harks back to another classic family sitcom, "Ozzie and Harriet."

Like his black-and-white counterpart, Ozzy is a befuddled father dealing with his savvy wife and teen-age children. But all similarities stop there. "The Osbournes" is unscripted and filled with R-rated dialogue.

Like other classic sitcom dads, Ozzy often seems helpless in his own home. But in the business world, Ozzy is now one of the most powerful people in Hollywood. His show is such a huge hit for MTV that he and his family have signed a multi-million dollar pact for another 20 episodes.

"The genius of Ozzy Osbourne is that they managed to find the first time out. There's this great clash with what is the last thing in the world you would expect Ozzy to end up in is a family setting. Suddenly, the Prince of Darkness is trying to change the bag in the kitchen garbage can," says Robert Thompson, professor of television and popular culture at Syracuse University.

And now there are people lining up to let the cameras in.

Just last week, Anna Nicole Smith sealed a deal for her own "reality-based" show, already shooting in Los Angeles. And according to managers for Kato Kaelin, the former O.J. Simpson houseguest is close to signing a network deal for a reality-based show called, you guessed it, "House Guest." Other stars reportedly working on their own versions of "The Osbournes" are Cybill Shepherd, Sean Combs, Courtney Love, David Lee Roth, and even the teen idol Brandy.

So what would make audiences care enough to watch?

Professor Thompson gave us his take in three points:

Hattie Kauffman asked the folks attending this year's MTV Movie Awards who they'd like to see.

"I'd love to see what Michael Jackson is like behind closed doors. I think that would be a little bit interesting," said Linda Cardellini of "Scooby-Doo."

As for Anna Nicole Smith...

"Oh, my God! Sorry. No, maybe, I don't want to be rude, but I probably wouldn't because I've got two kids," said Nicole Kidman.

But Sharon Osbourne was not so shocked by the question.

"No, I'm dying to see Anna Nicole Smith at home. I love her," she said.

And what about Hillary Swank? Kauffman asked the actress herself if there were a show called "The Swanks," what would people see?

"A lot of boring stuff. I mean, (gesturing like she's using a remote control), me probably trying to find 'The Osbournes,'" she said.

In only 10 episodes in its first season, "The Osbournes" became MTV's highest rated series ever and the season's most watched new entertainment show on cable.

The season finale of "The Osbournes," which aired on May 7, won MTV its highest ratings ever.