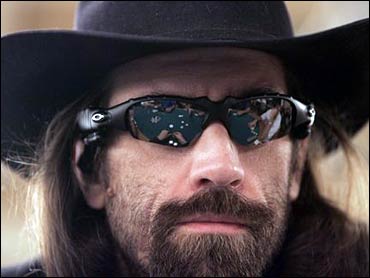 In 12 hours I will join the other 1,850 players who have survived Day One of this year's championship event. We started on Thursday with a total of 5,619 players. More than 3,750 have been eliminated including some of the top stars of the professional poker ranks -- Erik Seidel, Daniel "Poker Kid" Negreanu, Chris "Jesus" Ferguson, Andy Bloch, Phil Gordon, Phil "Unabomber" Laak, Antonio "The Magician" Esfandiari and Phil "Poker Brat" Hellmuth to name just a few. In the celebrity ranks one of the top contenders was Tobey Maguire. He busted out too. Unfortunately, my friends Russell Rosenblum, Matt Matros, Larry Weiner, and Adam Green were among the Day One casualties.

I will start tomorrow with $34,725 in chips. Thirty percent of the remaining players have more chips than me. Seventy percent have fewer. Every two hours the blinds and antes (forced bets before the cards are dealt) will be increased, so everyone has to win a pot or two every hour just to stay even. Plus you have to win additional pots to replace the chips inevitably lost when you play a hand and lose, or raise before the flop only to find that you have to fold your hand when a player with a better hand re-raises.

Play will continue on Sunday until 60 percent of the remaining field is eliminated. When we get down to about 750 players, the survivors will move on to Day Three. It took more than 15 hours on Day One to eliminate two thirds of the field. Presumably it will take less time to eliminate 60 percent tomorrow, so we should be done by midnight or 1 a.m.

To prepare for Day Two, I took two days off. I have not played a single hand of poker since Thursday night. I spent Friday and today sleeping, lazing at the pool, studying poker books, and relaxing with friends. I feel great. If the cards cooperate tomorrow, I feel like I have a decent chance to make it to Day Three for the first time. (I busted out at the end of Day Two in 2003, the only other time I have played in the championship event.)

I have many stories to tell from the things I have seen and people I have met in the past three days, but they will have to wait. I need to finish my preparation and get to bed. But I can't resist telling just one.

I carry all my stuff with me in a backpack during the day, so I don't have to walk a mile from the Rio (where the tournament is held) to the Gold Coast (the hotel next door where I am staying) every time I need something. Yesterday morning I put in my backpack the shirt I have been getting famous players to autograph for a friend, in case I had occasion to get some of the people I missed last week. In the course of the day I got Doyle Brunson and a few other stars.

During the tournament, they suspend play every two hours for a 20 minute bathroom break. Well, try to imagine 1800 people all in one huge room. At the stroke of a bell, they all rush to the 4 exits and sprint for the nearest bathroom. It's a fiasco. You have to be back in your seat in 20 minutes. The line for the nearest men's room is at least 100 people long, so most of us keep moving and head for the next set of bathrooms halfway between the convention wing of the hotel and the casino wing, about 3/10 of a mile. When you get there you find there is still a line, but it is only 40 people instead of 100. So you keep going to the next one, in the casino, another 2/10 of a mile away. That was has a line, but a fairly short one. If you are impatient about standing in lines, like me, you keep going to the men's room on the far side of the casino. No line there. Of course by the time you pee and run back to the convention area, you either just make or just miss the first hand. If you stop to buy a candy bar you definitely miss the first few hands.

So Thursday afternoon they called a break, and everyone is rushing. It is shoulder to shoulder in the corridor from the tournament room to the main corridor and we are inching along. Whom do I see ahead of me but Chris Ferguson and Clonie Gowan, one of the top female players on the circuit. I knew I had gotten Chris' signature last week, but I wasn't sure about Clonie's.

So I edged my way up to her, apologized for bothering her at such a time, and said that my friend at home is a great fan of hers and could I trouble her for an autograph. She was gracious enough to agree, and I reached into my backpack to pull out the shirt and marking pen. I pulled out the first piece of fabric I felt. It turned out to be the extra pair of underpants I had in my backpack, to change into during the one hour dinner break when I planned to use a friend's room to shower and change. She saw the undies coming out of the backpack, looked at me like I was a freak, and said "I don't think so".

Of course my eyes were focused on her at the time, so it took me a minute to realize why she had reacted that way. Needless to say I was mortified. I quickly shoved the undies back into my backpack and pulled out the shirt. She laughed and signed it. Only later did I realize I had already had gotten her autograph last week.

In the morning I will check out the posted computer printout showing what table and seat number I have been assigned. I will also be able to see who else is going to be at my table, and how many chips each one has. Position and chip count are significant factors in one's strategy. My friend Russell Rosenblum, a Bethesda lawyer who is a much more experienced and successful tournament player than me, has graciously agreed to meet me in the morning to go over the makeup of my table with me. I value his strategic advice a lot, so it will be good to have his help. He could easily have left town tonight after being eliminated, but is staying on for another day in part to help me and others.

I have one secret weapon planned. Oxygen.

I visited the oxygen bar at the Rio yesterday, and they sell a portable oxygen inhaler which I plan to buy in the morning. At midnight, when you have been concentrating under stress for 12 hours straight, mental fatigue and stamina become significant factors. No limit hold'em is an unforgiving game. You can play great poker for two days, and watch it all go up in smoke if you make a single mental error at a critical point in a big pot. I don't know if a dose of supplemental oxygen every hour starting at 11 p.m. will help, but I figure it can't hurt.

Wish me luck. I will do everything in my power to avoid making mistakes. If I don't get unlucky, I hope to score a personal best by surviving into Day Three.