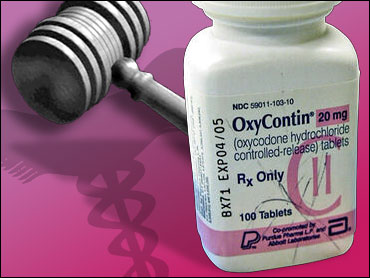 The Stamford, Conn.-based maker of the powerful painkiller, and three of its current and former executives, pleaded guilty Thursday to misleading the public about OxyContin's risk of addiction, a federal prosecutor and the company said.

Purdue Pharma L.P., its president, top lawyer and former chief medical officer will pay $634.5 million in fines for claiming the drug was less addictive and less subject to abuse than other pain medications, U.S. Attorney John Brownlee said in a news release.

The plea agreement comes after the company agreed to pay $19.5 million to 26 states and the District of Columbia to settle complaints that it encouraged physicians to overprescribe OxyContin.

For six million Americans a year, OxyContin is the prescription painkiller of choice, CBS News correspondent Bob Orr reports. But it's also a highly addictive and deadly pill — the favorite narcotic of drug abusers.

More than 400 deaths have been blamed on the drug, adds Orr. Now Purdue Pharma admits it lied to doctors and patients about the risks...to boost sales.

"With its OxyContin, Purdue unleashed a highly abusable, addictive, and potentially dangerous drug on an unsuspecting and unknowing public," Brownlee said. "For these misrepresentations and crimes, Purdue and its executives have been brought to justice."

Purdue learned from focus groups with physicians in 1995 that they were worried about the abuse potential of OxyContin. The company then gave false information to its sales representatives that the drug had less potential for addiction and abuse than other painkillers, the U.S. attorney said.

Even though the company was warned by health professionals, the media and members of its own sales force, "Perdue continued to push a fraudulent marketing campaign that promoted OxyContin as less addictive, less subject to abuse and less likely to cause withdrawal when they knew in fact that that was not true," Brownlee told CBS News correspondent Barry Bagnato.

"People who are suffering from chronic pain want a drug that can relieve them of that pain and yet the same time is safe not only for themselves but for society," Brownlee said. "And Perdue promised that."

"Doctors are often approached right in their offices by pharmaceutical company sales reps dispensing information about one medication or another," said CBS News medical correspondent Dr. Jon LaPook. "This case is a reminder to doctors not to believe everything they hear — and to drug companies that the FDA will hold them accountable for fraudulent practices."

Purdue Pharma said it accepted responsibility for its employees' actions.

"During the past six years, we have implemented changes to our internal training, compliance and monitoring systems that seek to assure that similar events do not occur again," the company said in a news release.

OxyContin, a trade name for oxycodone, is designed to have a time-released effect on a patient's pain, but people who abuse the medication will crush the pills and then swallow, snort or inject the drug so that its pain-killing properties — meant to be spread out over 12 hours — are absorbed all at once.

From 1996 to 2001, the number of oxycodone-related deaths nationwide increased 400 percent while the annual number of OxyContin prescriptions increased nearly 20-fold, according to a report by the U.S. Drug Enforcement Administration. In 2002, the DEA said the drug caused 146 deaths and contributed to another 318.

"I think these people are drug pushers, just like street drug pushers," said Joe Califano, the head of the National Center on Addiction and Substance Abuse and author of "High Society: How Substance Abuse Ravages America and What to Do About It." " ... It is outrageous that these people pushed this drug, addictive as they knew it was, onto the market and in effect damaged millions of innocent people."

The drug became a major problem in Virginia — particularly southwest Virginia and other areas of the Appalachian region, where it got the nickname "hillbilly heroin."

In western Virginia, 228 people died from overdoses of oxycodone from 1996 to 2005, Brownlee said.

The fines will be distributed to state and federal law enforcement agencies, the federal government, federal and state Medicaid programs, a Virginia prescription monitoring program and individuals who had sued the company. At least $5 million will go toward a six-year company program to monitor compliance with the agreement.