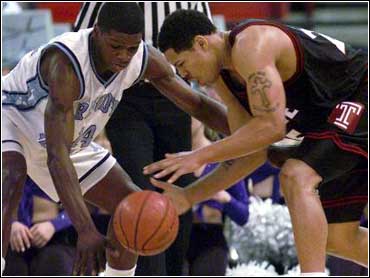 This was impressive defense even for Temple.

The 21st-ranked Owls held Rhode Island to two field goals in the first half in a 74-70 victory Saturday, their seventh straight and each of those opponents has scored 50 points or less.

"I told the team at halftime that I wanted them to understand that when you get a big lead you can't let it affect your concentration," Owls coach John Chaney said.

"You have to keep playing and executing as if you were playing the best team in the country," Chaney said.

"You could tell they were frustrated," Temple guard Pepe Sanchez said of the Rams (5-17, 2-7), who lost their fifth straight

"They tried to go too fast and they made mistakes," Sanchez said.

Temple won the earlier meeting with Rhode Island this season 88-45.

"You shoot 10 percent you're not beating anybody let alone Temple," Rhode Island coach Jerry DeGregorio said. "I thought we came out with no energy. Then our inability to make shots and their defense caused a lot of problems."

Mark Karcher and Quincy Wadley each had 15 points for Temple, while Sanchez had two points and eight assists.

"It was a chance for players who don't play a lot to play in the last 10 minutes," Sanchez said. "Seven or eight minutes is a lot to those guys."

Chaney talked to DeGregorio and the Rhode Island players after the game.

"I told them sports is about overcoming your weaknesses," Chaney said. "The greatest time to teach is when you're losing because they'll listen to you."

"He gave us encouraging words and was very kind," DeGregorio said. "That's why he's one of the giants in our business."