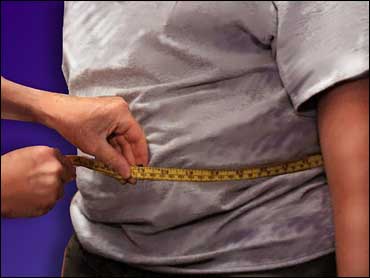 Being overweight is nowhere near as big a killer as the government thought, ranking No. 7 instead of No. 2 among the nation's leading preventable causes of death, according to a startling new calculation from the Centers for Disease Control and Prevention.

The CDC estimated Tuesday that weighing too much accounts for 25,814 deaths a year in the United States. As recently as January, the CDC came up with an estimate 14 times higher: 365,000 deaths.

The new analysis found that obesity — being extremely overweight — is indisputably lethal. But like several recent smaller studies, it found that people who are modestly overweight actually have a lower risk of death than those of normal weight.

Biostatistician Mary Grace Kovar, a consultant for the University of Chicago's National Opinion Research Center in Washington, said "normal" may be set too low for today's population. Also, Americans classified as overweight are eating better, exercising more and managing their blood pressure better than they used to, she said.

The study — an analysis of mortality rates and body-mass index, or BMI — was published in Wednesday's Journal of the American Medical Association.

Based on the new calculation, excess weight would drop from the second leading cause of preventable death, after smoking, to seventh. It would fall behind car crashes and guns on the list of killers.

Calculating the health effects of obesity has been a major source of controversy at the CDC.

Last year, the CDC issued a study that said being overweight causes 400,000 deaths a year and would soon overtake tobacco as the top U.S. killer. After scientists inside and outside the agency questioned the figure, the CDC admitted making a calculation error and lowered its estimate three months ago to 365,000.

CDC Director Dr. Julie Gerberding said because of the uncertainty in calculating the health effects of being overweight, the CDC is not going to use the brand-new figure of 25,814 in its public awareness campaigns and is not going to scale back its fight against obesity.

"There's absolutely no question that obesity is a major public health concern of this country," she said. Gerberding said the CDC will work to improve methods for calculating the consequences of obesity.

Dr. JoAnn Manson, chief of preventive medicine at Brigham and Women's Hospital in Boston, said she is not convinced the new estimate is right.

"I think it's likely there has been a weakening of the mortality effect due to improved treatments for obesity," she said. "But I think this magnitude is surprising and requires corroboration."

The analysis was led by Katherine Flegal, a senior research scientist with the CDC's National Center for Health Statistics. The study that had to be corrected was conducted by a different arm of the CDC, the Division of Adult and Community Health, and its authors included Gerberding.

One major reason for the far lower number in this latest study is that it used more recent data, researchers said.

"This analysis is far more sophisticated," said Kovar, who was not involved in the new study. "They are very careful and are not overstating their case."

A related study, also in Wednesday's JAMA, found that overweight Americans are healthier than ever, thanks to better maintenance of blood pressure and cholesterol levels. Diabetes is on the rise among people in all weight categories, however.

Flegal said the two studies raise questions about what definitions to use for obesity and "where to draw the line." Under current government standards, a BMI, or weight-to-height measurement, of 25 or higher is overweight; 30 and above is obese.

In recent years, the government has spent millions of dollars fighting obesity and publicizing the message that two out of three American adults are overweight or obese, and at higher risk for heart disease, arthritis and diabetes.

James Fallows on the message from Joe Biden's inauguration

The Atlantic writer says the new president's inaugural address speaks to an ever-growing nation's resolve and will to succeed in the face of cruel obstacles and divisiveness.

"There was no team, full-time team in the White House working on coronavirus," Birx told "Face the Nation."

Democrat John Fetterman looms tall – in person and in politics

The 6'8" lieutenant-governor of Pennsylvania is a blunt-talking, self-described progressive intent on breaking through with swing voters while working to revitalize the state's Rust Belt.

With the coronavirus affecting markets around the world, Italy's fashion industry, which has long drawn on the talent and traditions of artisans, is now drawing on their creativity to survive.

The award-winning broadcaster was noted for interviewing the famous and infamous for more than 60 years.