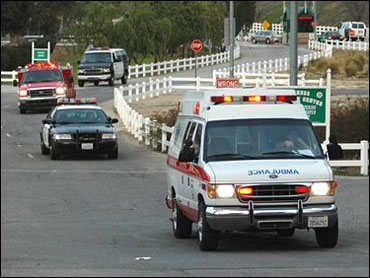 An ambulance is diverted every minute, on average, to a different hospital because emergency rooms in the United States are so overcrowded, suggests one of the first national studies of the issue.

The study did not measure how the delays in getting to hospitals affected patients' survival, but experts said it could not have been for the better.

"Most of the people that arrive by ambulance are older and they have more serious medical conditions," said Catharine Burt of the National Center for Health Statistics, the study's lead author.

"So the fact that they're being delayed ... whether it's two minutes or five minutes or 15 ... I can only assume that's going to have some impact," she said.

About half a million ambulances were diverted from their original destinations because the receiving hospitals' emergency departments were too overcrowded, the survey data from 2003 indicated. The study, released Monday, is being published in the journal Annals of Emergency Medicine.

An ambulance diversion occurs when a hospital emergency department closes its doors to incoming ambulances and directs traffic to other hospitals. Often, diversions occur because a hospital's ER is overcrowded or the hospital has a shortage of open critical care beds.

The problem is not new. But most previous reports were "based on just a few cities complaining bitterly about the problem. We didn't know the national impact."

The findings come from responses from 405 U.S. hospital emergency departments — about 10 percent of the nation's hospital ERs, Burt said.

The researchers found out what percentage of the time hospitals reported being on diversion and counted ambulance arrivals, then made estimates. They did not count how many times ambulance drivers said they were diverted.

Air and ground ambulances brought in about 14 percent of ER patient traffic that year, the researchers found.

About 16.2 million patients arrived by ambulance to all emergency departments, and 70 percent had urgent conditions that required care within an hour. More than 60 percent were 45 and older, and almost 40 percent were 65 and older, researchers said.

Ambulance diversions sometimes produce a chain reaction — particularly in larger cities, where the problem is most often reported. That was documented in a companion study that found ambulance diversions at Los Angeles County, Calif., hospitals more than tripled between 1998 and 2004.

"This suggests that when a hospital decides to go on diversion, nearby hospitals subsequently go on diversion as they become overwhelmed by the increase in incoming ambulance transports," said Dr. Benjamin Sun, that study's lead author, in a prepared statement.

"Around Atlanta, diversions are a regular thing," said Denise Simpson, a spokeswoman for Grady Memorial Hospital, which operates the city's busiest ER and trauma center.

"The problem is when everyone's on diversion. Then nobody's on diversion, because the ambulances have to go somewhere," she said.

Burt said newer data for 2004, which has not been published, showed the diversions occurred at about the same rate.

But hospitals have been working on increasing capacity in the last three years, and it's possible the national situation has improved since then, she added.