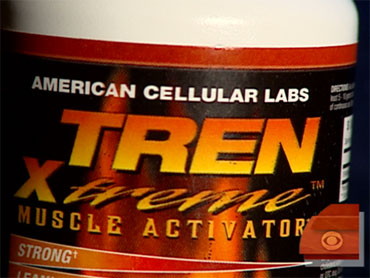 Last March, Cobiella reported on Tren, a dietary supplement that Louisiana high school football players and their coach told CBS News was the next best thing to a steroid.

But is it "the next best thing" -- or actual steroids?

Cobiella and her team bought Tren over the Internet and in a health store that sells supplements.

When Cobiella asked an unidentified health store clerk if the product acts like a steroid, he responded, "That's what it is, that's what it is. But it's a safer one…"

Then, Cobiella and her team sent three brands to be tested by renowned steroid expert, Dr. Don Catlin. Instead of being harmless dietary supplements, his tests revealed Tren is an illegal anabolic steroid.

Cobiella said CBS News reports about the dangers of Tren were criticized in the online muscle-building community, where Tren is widely used and extremely popular. However, Cobiella remarked, they predicted the next chapter of the story.

After about 2 weeks, he said he experienced mood swings and his nipples started to change.

And Kalogeropoulos is not alone. His friends - all 22 year olds - say they also developed enlarged breasts and nipples so sensitive they have to wrap them in ace bandages just to play soccer.

Brett Preston said after using Tren his nipples grew inflamed. That's when he went to the doctor.

Cobiella reported this condition is called "gynecomastia," an enlargement of the male breast.

Preston and his friends are part of a class action lawsuit against American Cellular Labs, the maker of Tren Xtreme, which they say caused pain so severe, the only way to relieve it is surgery.

Preston said, pointing to his chest, "All that is not muscle. It's all breast tissue. And then you can see the scars from where I had my last surgery. And they have to go in here and take out all the tissue that's left behind it on both sides."

Preston and his friends say they bought Tren at a supplement store chain Cobiella caught on hidden camera.

On hidden camera, Cobiella and her team captured a man saying, "The worst thing is who some of these retail stores sell it to. Selling it to kids and stuff. You know, 18, 19, 20-year-old kids who really shouldn't be taking it, you know what I mean?"

He said, "This is not even a medication or something that has been prescribed ever by physicians legally anywhere in the world and you're giving this novel chemical clandestinely to thousands, maybe millions of people."

The Food and Drug Administration (FDA) is finally beginning to crack down, Cobiella said. In highly publicized raids in July and September, agents seized dozens of designer steroids masquerading as legal supplements, including the brand taken by Preston and his friends - American Cellular Labs' Tren Xtreme.

Kalogeropoulos said, "How much more money is it going to cost until somebody takes this off market and does something about it, or people just start opening their eyes?"

Last week, Cobiella went to a supplement store. She reported her team had no problem finding four more brands that an unidentified salesman claims have Tren.

The unidentified salesman told Cobiella in the store, "I have Epi-Tren, I have Stakabol, I have Black Mass, which is down there, and then Tren Stack."

"And all of those have Tren in them?" Cobiella asked.

Cobiella added on "The Early Show" the soccer players she met said they had at least 15 other friends suffering from the same problem of sensitive breasts - all from taking Tren.

Cobiella said her team tried to reach the makers of the three brands of Tren products they tested, but the only company that listed a working number had no comment. The brand used by the soccer players in our story - Tren Xtreme - has a number on the bottle, but the number is for the FDA's own hotline to report adverse side effects.

"Early Show" co-anchor Harry Smith asked Cobiella if the athletes she interviewed were trying to buy a nutritional supplement, and instead got a steroid in the bottle.

Cobiella said, based on Catlin's tests, what's in the bottle is actually a designer anabolic steroid.

"Nowhere on the bottle does it say 'steroid,'" she said. "They usually say 'muscle activator' or something like that."