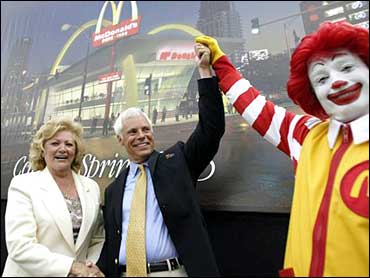 McDonald's Corp., the world's largest restaurant chain, is testing the use of remote call centers to handle drive-thru orders in an effort to improve service.

Company officials said the idea, being tested at a small number of restaurants in the Pacific Northwest, is aimed at reducing the number of mistakes at the drive-thru window.

"If you're in L.A. and you hear a person ... with a North Dakota accent taking your order, you'll know what we're up to," McDonald's Chief Executive Officer Jim Skinner said during a presentation to analysts Thursday in New York.

CBS News Radio Correspondent Lou Miliano reports the strategy is based on the theory that mistakes come from the order-taker, not the cook line. Sending orders directly to a call center and back to the grill could also allow McDonald's employees to focus on delivering better customer service, the company said.

"You have a professional order taker with strong communications skills whose job is to do nothing but take down orders," said Matthew Paull, the chief financial officer.

Paull said a "heavy percentage" of complaints the company receives are from drive-thru customers who got the wrong order.

"Even if 95 percent of the time it is right, those 5 percent are very upset with us," he said.

McDonald's spokeswoman Anna Rozenich said Friday it was too early to say whether the outsourcing strategy would be implemented systemwide.