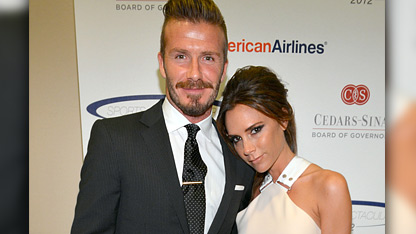 You already know celebs are extravagant, and more so than ever when it comes to Christmas gifts -- just take David Beckham and Blake Shelton's presents to their beloved wives.

Victoria Beckham doesn't just get to wake up next to her soccer stud on Christmas morning, but she'll also get to lounge around in one of his reported presents to her -- silk pajamas that retail for $422.

According to WWD, David put in a call this week to famed British department store Harrods for not one, but two, pairs of silk Olivia von Halle pajamas, which start at $422. Von Halle's beyond luxurious PJ's are inspired by Coco Chanel's loungewear in the 1920s, and are sold in just six retailers around the world.

And this being the Beckhams, you just know they didn't buy the cheapest pair available, which probably means he spent about $1,000 on two pairs of pajamas.

Though David's $,1000 pajamas pale in comparison to Blake's reported gift for Miranda -- a $20,000 gold necklace representing her many dogs.

According to In Touch, The Voice coach designed the pricey gold necklace with 20 charms on it himself, and the charms are engraved with the names of her dogs.

But newly single mom Katie Holmes has them all beat -- the Daily Mail reports that she's giving her daughter Suri, 6, a $24,000 Grand Victorian Playhouse from Sweet Retreat Kids, which comes equipped with running water and electricity.

...Guess this is Suri's version of a treehouse?

Ball drops in Times Square to ring in 2013