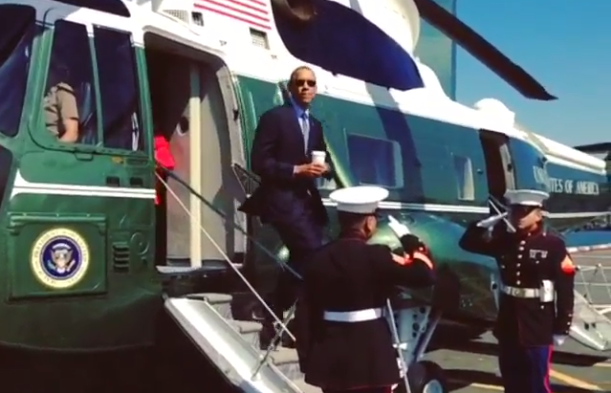 The latest round of outrage aimed at President Obama was caused by his morning caffeine fix.

When the president exited Marine One in New York City Tuesday en route to the United Nations, he had a coffee cup in his right hand as he lifted it to salute the two Marines who greeted him there.

This gesture, according to all those who took to Twitter using the hashtag, #LatteSalute was just downright disrespectful.

"Embarrassed by president's salute! So arrogant! #LatteSalute" wrote one user, @EmilyDickerson, on Twitter. "As an Iraq vet, seeing OB's #LatteSalutemakes me sick! He repeatedly show disrespect to my fellow service members," wrote @GeoKat.

Some commenters took a different tack, suggesting the president was being hypocritical for using a non-disposable cup on his way to address the issue of climate change at the United Nations.

"The worst part of this is that he's using a disposable, non reusable cup! That he's contributing to the 71 million tons of garbage in the landfill per year, that's the real issue. Focus on the pressing issues, please, we're choking the planet!!," wrote janenebecker123 on Instagram.

Sensing an opportunity, the National Republican Congressional Committee posted the video to its website, writing, "This might be the most absurd video of President Obama we've ever seen." They invited people to express their outrage, of course, by donating money to elect Republicans.

The White House shares a great deal of responsibility for the outrage, however. The video made the rounds after it was posted to the official White House Instagram account.

It's unclear whether #LatteSalute is the correct shorthand for the screw up. The president generally drinks tea, not coffee.

While civilian presidents are not required to salute in response to the Marines who greet them upon landing, it has become a tradition dating back to President Ronald Reagan.

Mr. Obama is not the only president to salute with his hands full. Former President George W. Bush was frequently seen saluting while holding his Scottish Terrier, Barney. He tended, however, to shift Barney to his left hand so he could salute with his right.