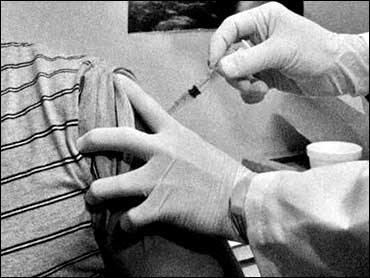 With warmer weather approaching, more of us will be spending time outdoors -- perhaps working in the yard or the garden.

What many people may not realize, however, is that when they are outdoors they are putting themselves at increased risk of contracting tetanus.

The Saturday Early Show's Dr. Mallika Marshall provided some advice to help you avoid getting the dangerous nerve disease.

Tetanus, also known as lockjaw, is caused by the toxic spores of a common bacterium. It can be found almost anywhere, including in the soil, in manure and in house dust.

You can get sick when the bacterium enters your body though a cut or a scratch, an animal bite, a surgical wound, a burn or, even by stepping on a rusty nail.

Marshall says everyone should be vaccinated for tetanus. Babies begin their tetanus series at 2 months of age and get boosters at 4 months, 6 months, 15 months and again between the ages of 4 and 6. They get another booster at age 12 or so. After that, they should be revaccinated every 10 years. Because of certain state laws, almost all children are adequately vaccinated against tetanus.

But as people grow into adulthood, they often forget the need to get vaccinated every 10 years. Adults who spend a lot time outdoors are most at risk for tetanus, because they may not been vaccinated for the disease since they were children. Elderly people are most at risk, and make up three out of four cases of tetanus in America.

In developing countries where kids are not adequately vaccinated, nearly 1 million children die annually from tetanus. In the United States, where most kids receive routine shots, tetanus is under control. There are only about 50 to 100 cases here every year.

The following are tetanus symptoms: