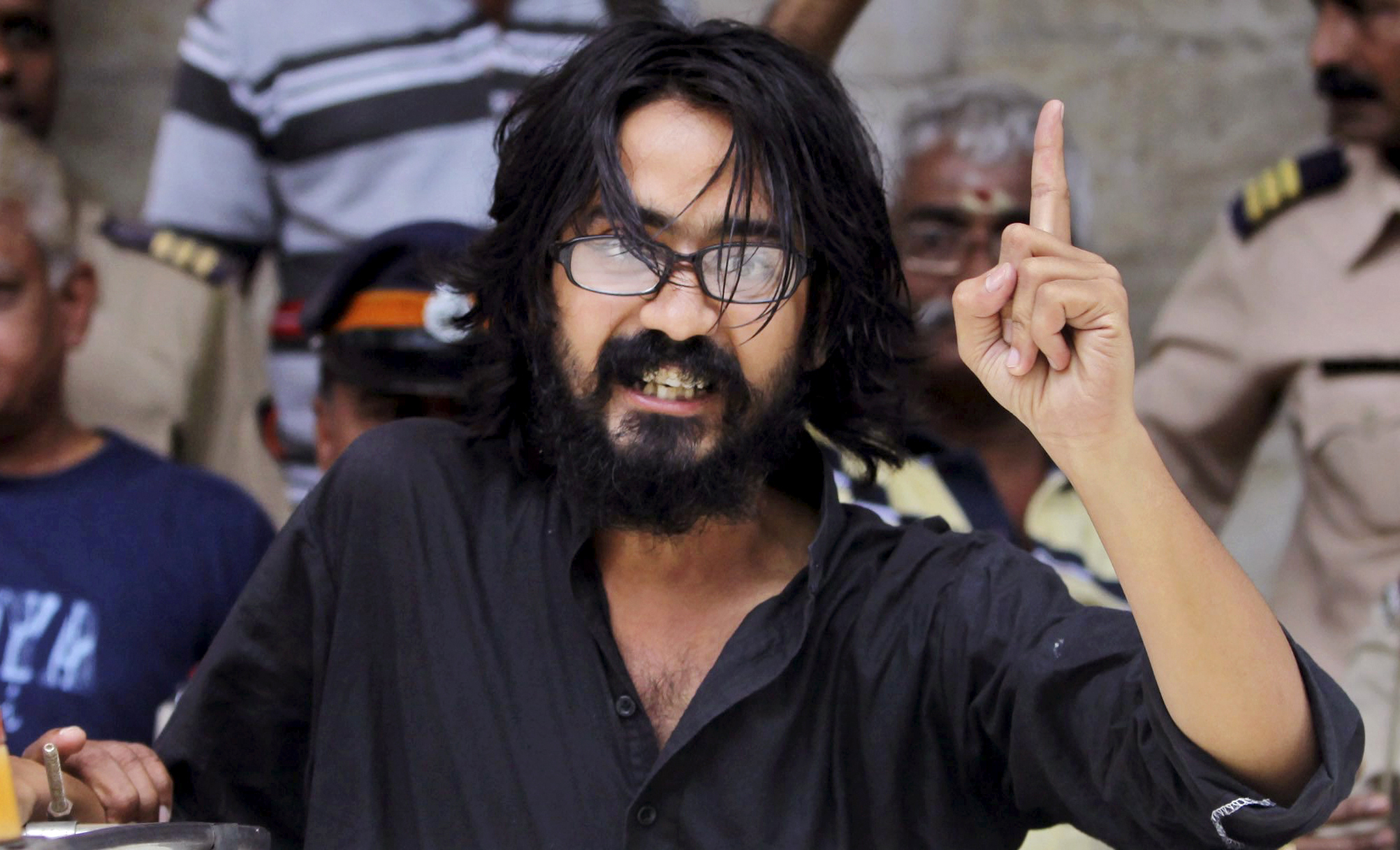 (AP) NEW DELHI - A political cartoonist whose drawings mock Indian government corruption has been jailed in a sedition investigation that was widely condemned Monday as evidence of political leaders' growing intolerance of criticism.

A defiant Aseem Trivedi refused bail at a court hearing Monday in Mumbai, saying he would remain in jail until the sedition charges against him were lifted. The court then extended his stay in police custody from one week to two.

"I am proud of what I have done. If telling the truth makes me a traitor, then I am one," Trivedi said as dozens of police escorted him out of the court.

He was arrested Sunday after police issued a warrant based on a political activist's complaint Trivedi's cartoons were "insulting" to the country. Students, opposition politicians and free speech advocates protested that Trivedi's arrest - on the very serious charge of sedition no less - showed politicians' increasing sensitivity to criticism.

Taken aback by the vehement protests, state Home Minister R.R. Patel said the government would review Trivedi's case and the charge, which is punishable by up to life in prison.

"Politicians must learn to be tolerant. This is not a dictatorship," Markandey Katju, a former Supreme Court justice who now heads the Press Council of India, told CNN-IBN television.

Trivedi, a freelance cartoonist, was one of two winners of the 2012 "Courage in Editorial Cartooning Award" by the U.S.-based Cartoonists Rights Network International. His cartoons lampooning widespread corruption among Indian politicians were displayed at a Mumbai protest in December by the anti-corruption crusader Anna Hazare.

A Mumbai-based lawyer's complaint to police cited one of those drawings that showed the four lions that form India's national symbol replaced by four wolves and the national slogan "truth shall prevail" replaced by "corruption shall prevail."

Information Minister Ambika Soni stressed that the constitution guaranteed freedom of expression but "also lays downs that we as Indian citizens should respect all national symbols.

"Our government is not for censorship; it is for self-regulation at every step," Soni said.

The cartoonist's father, Ashok Trivedi, told CNN-IBN that his son was being hounded because he was actively involved in Hazare's campaign to mobilize middle-class India to rise up against corrupt politicians and bureaucrats.

Katju said throwing Trivedi in jail was itself a criminal offense because he had not committed a crime.

"If you try to shut peoples' mouth, public anger will erupt violently," he warned.

The arrest came five months after a university professor was arrested in the state of West Bengal for forwarding an email cartoon that caricatured the chief minister there. Last month, a farmer in West Bengal was arrested and branded a Maoist insurgent after questioning the chief minister on her farm policy at a public meeting. Both are out on bail and face lesser charges than sedition.

Earlier this year, top education officials resigned amid a parliamentary uproar over a textbook that included a six-decade-old cartoon criticizing delays in crafting the constitution.

Indian law defines sedition as an act that brings hatred or attempts to excite disaffection toward the government. The law dates from India's colonial era when British rulers used it against Indian freedom fighters, including India's independence leader Mohandas K. Gandhi.