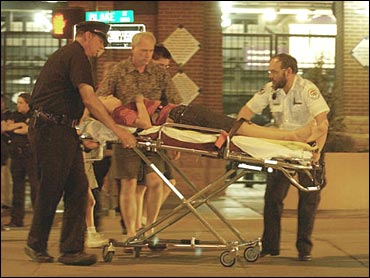 The Colorado Rockies shut down all their stadium escalators for Thursday's night's game, one day after a three-story-high escalator apparently malfunctioned and tossed dozens of screaming baseball fans into a heap.

At least 32 people were injured, and nine remained hospitalized, authorities said Thursday. Assistant Fire Chief Larry Trujillo said most injuries were fractures, cuts and bruises, and none appeared to be critical.

"It's like it had no brakes and everybody was just piling up at the end of it," said Cherri Brownfield, who was on the escalator Wednesday night following a game and fireworks show.

The escalator was carrying people from the upper deck to street level at about 10:20 p.m. Game attendance was a near-capacity 47,032, and most had stayed for the fireworks.

Inspectors who looked at the escalator after the accident found nothing to explain what happened, Trujillo said.

Officials with Kone Corp., which installed and maintains the escalators, were working with city building inspectors Thursday.

On May 24, another escalator at Coors Field had stopped abruptly during a game, leaving 12 people with cuts, bruises and other minor injuries. The cause of that accident has not been determined, Alves said.Rockies spokesman Jay Alves said all seven Coors Field escalators would remain shut down during Thursday evening's game. It wasn't clear how soon they would be restarted.

Vendor Alex Frenier was working Wednesday night and said he heard people screaming and saw them falling down when the escalator apparently malfunctioned. "I saw people's heads all hitting each other," he said.

"People were just sliding down like an avalanche," said Nick Nossinger, who had been watching the fireworks.