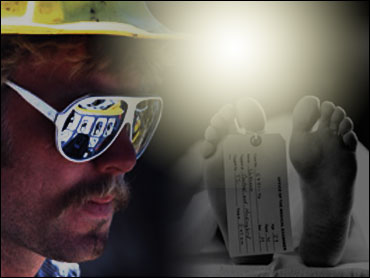 A study suggests the oft-reported sensation of leaving the body during a brush with death may have a simple explanation in the body itself.

"Out-of-body" and "near-death" experiences - in which people resuscitated on the operating table speak of being drawn toward a brilliant light, or looking down on their own bodies - may be influenced by a portion of the brain misfiring under stress, the study suggests.

The paper describes one patient's visions while she was being evaluated for epilepsy and does not wrestle with issues of the soul. And researchers noted that the brain-mapping results may not entirely explain the phenomenon.

The study focuses on a processing center in the brain known as the angular gyrus, thought to play an important role in the way the brain analyzes sensory information to give us a perception of our own bodies. When it misfires, they speculate, the result can be visions of floating outside of ourselves.

The findings were published in Thursday's issue of the journal Nature.

"We do not fully understand the neurological mechanism that causes OBEs," concedes the study's lead researcher, neurologist Dr. Olaf Blanke at the University Hospitals of Geneva and Lausanne in Switzerland.

Skeptics of out-of-body experiences say the experiment goes a long way toward providing a scientific explanation for what some believe is a paranormal phenomenon, even if the study is based on only one patient.

"It's another blow against those who believe that the mind and spirit are somehow separate from the brain," says psychologist Michael Shermer, director of the Skeptic Society, which seeks to debunk alien abductions and other paranormal claims. "In reality, all experience is derived from the brain."

Other researchers describe the experiment as modest but interesting.

Neurologist Dr. Bruce Greyson of the University of Virginia notes that the experiment does not necessarily prove that all out-of-body experiences are illusions.

"We cannot assume from the fact that electrical stimulation of the brain can induce OBE-like illusions that all OBEs are therefore illusions," says Greyson.

The Swiss researchers mapped the brain activity of a 43-year old woman who had been experiencing seizures for 11 years. They implanted electrodes to stimulate portions of her brain's right temporal lobe.

The temporal lobe, which includes the angular gyrus structure, is associated with perception of sound, touch, memory and speech.

Blanke suspects that the right angular gyrus integrates signals from the visual system, as well as information on touch and balance.

When electrical stimulation was applied, the patient reported seeing herself "lying in bed, from above, but I only see my legs and lower trunk." She also described herself as "floating" near the ceiling.

The Swiss researchers produced the sensation, which lasted for about two seconds, three times in the patient. She reported feelings of lightness and floating about two yards above the bed, close to the ceiling.

When Blanke and his team asked the woman to look at a part of her body from the heightened position, her legs for example, she had illusions and reported seeing her legs "becoming shorter."

"She saw this. It was very real. She had the feeling she punched herself in the head if she bent the arm a bit," Blanke said.

Scientists suspect that about 10 percent of people brought back from the brink of death experience something similar but it has been difficult to prove it actually occurs.

The phenomenon has also been reported by some migraine, epilepsy and stroke patients.

Millions of people have reported OBEs, but relatively few have been clinically analyzed.

Last December, the British medical journal Lancet published a Dutch study in which 344 cardiac patients were resuscitated from clinical death. About 12 percent reported seeing light at the end of a tunnel, or speaking to dead relatives.

Other researchers have suggested that OBEs occur as brain cells die from lack of oxygen, or when the brain releases pain-reducing chemicals called endorphins.

The scientists involved in the new study theorize that an out-of-body experience happens when the brain is unable to link up the information it receives from the sensations of vision, touch and balance.

Blanke says he hopes his work will stimulate more collaboration between neurologists and scientists who have been involved in the phenomenological approach, to better understand out-of-body experiences.