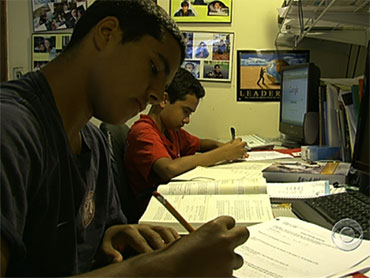 The following report is part of CBS News' new series on education: Reading, Writing and Reform.

In every town in America, the back-to-school rush is on, reports CBS News correspondent Jim Axelrod.

In Croton, N.Y., the Arturo brothers are already cracking the books.

"I feel we get our money's worth in Croton," said the boys' mother. "Especially for three kids."

The public schools have done right by the Arturos, but that's not the case across the board, says education consultant Mark Schneider.

(Scroll down to watch the video)

Where does the United States outrank Finland? On the amount spent per student: just over $129,000 from K through 12. The other countries average $95,000.

When it comes to high school graduation rates, the United States is 20th on the list. Germany, Japan, Korea and the U.K. all do better with graduation rates of 90 percent or more. In the Unites States, it's just 75 percent.

It's not so much that the United States has slowed down in the last half a century, it's more that other countries sped up.

"We need more octane now," said Amy Wilkins of the Education Trust. "The rest of the world is running faster than we are because they looked at what we did and they took what was good about us and added to it."

"The consensus is not surprising, the most important ingredient in what works is the quality of a student's teacher," said Schneider.

The U.S. has one of the shorter school years: 180 days versus 220 for South Korea. Research shows teachers spend up to six weeks re-teaching what kids forgot over the summer. So a shorter break may be better.

"We still have an education system that is very much geared for the industrial age, if not the agrarian age," said Wilkins. "We've gotten stuck in the old norms. The world has changed and our schools have not kept up.

Now, the numbers suggest, might be time for a new lesson plan.