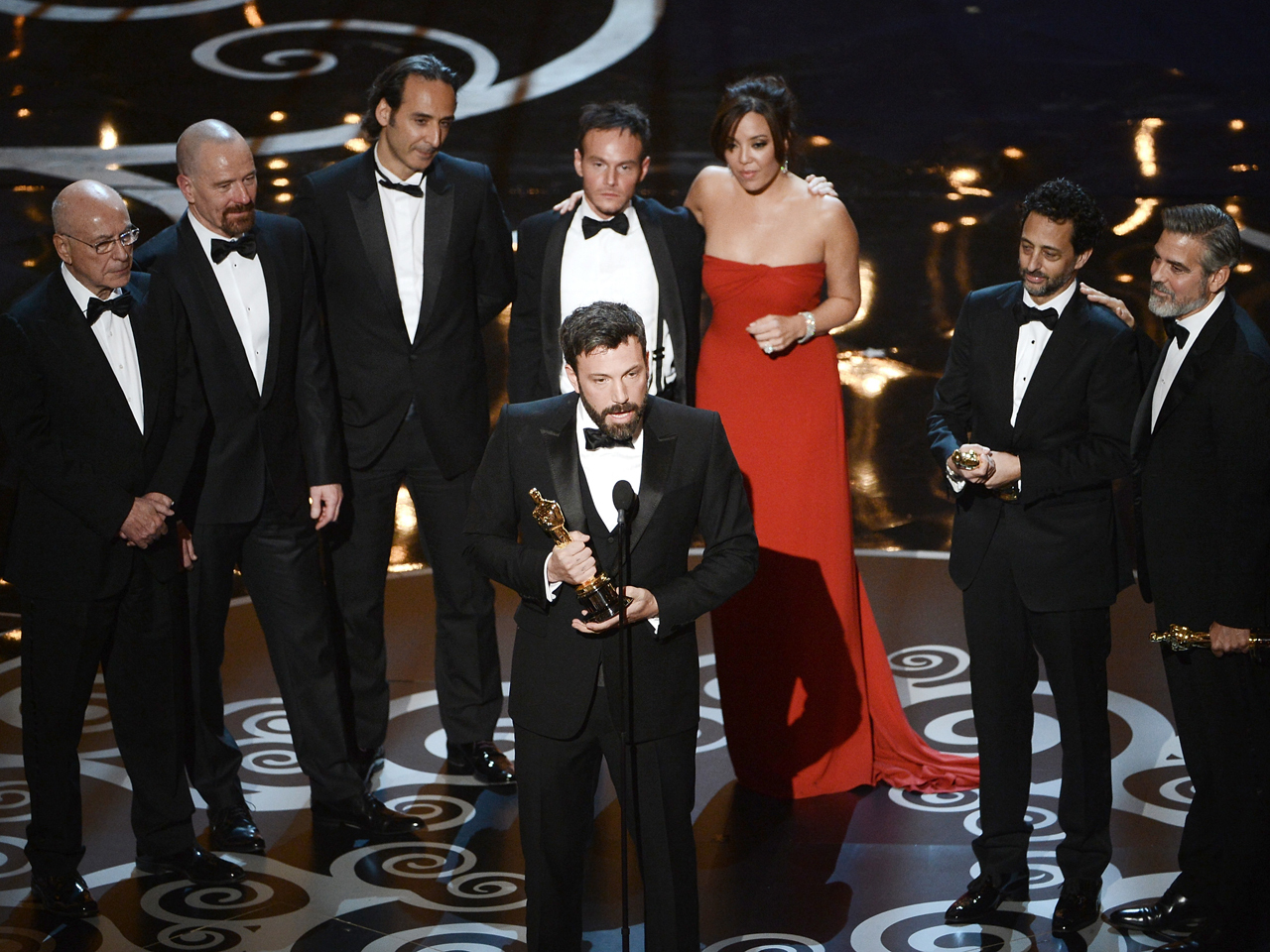 It's the first best picture winner not to be nominated for best director since 1989's "Driving Miss Daisy." But despite the omission of Affleck -- or perhaps buoyed by it -- "Argo" emerged as the Oscar favorite, winning top honors from the Directors, Producers, Screen Actors and Writers Guilds.

"There are eight great films that have every right, as much a right to be up here as we do," Affleck said of the other best-picture nominees.

In share-the-wealth mode, Oscar voters spread Sunday's honors among a range of films, with "Argo" winning three trophies but "Life of Pi" leading with four.

Daniel Day-Lewis joined a select group of recipients with his third Oscar, taking the best actor trophy for his performance as Abraham Lincoln in the Civil War saga "Lincoln."

The award for best actress went to Jennifer Lawrence for her performance as a young widower in "Silver Linings Playbook." It's the first Oscar for the 22-year-old Lawrence, who was also nominated for "Winter's Bone" in 2011. The actress tripped on her Dior gown as she made her way to the stage, but by the time she got to the microphone, the Dolby Theatre crowd applauded her with a standing ovation.

"You guys are just standing up because you feel bad that I fell," she said.

Anne Hathaway went from propping up leaden sidekick James Franco at the Academy Awards two years ago to hefting a golden statue of her own with a supporting-actress Oscar win as a doomed mother-turned-prostitute in the musical "Les Miserables."

"It came true," Hathaway said as she accepted the award. She famously cropped her hair on camera playing the gaunt Fantine, and her full-throated, one-take rendition of "I Dreamed a Dream" was classic Oscar-winning stuff. She was one of the night's most obvious shoo-ins, having swept the major awards leading up to the Oscars.

Christoph Waltz won his second supporting-actor Oscar for a Quentin Tarantino film, this time as a genteel bounty hunter in the slave-revenge saga "Django Unchained." Tarantino also won his second Oscar, for original screenplay for "Django."

In a choked voice, Waltz offered thanks to his character and "to his creator and the creator of his awe-inspiring world, Quentin Tarantino." He also offered thanks to his supporting-actor competitors, who included two-time Oscar-winner Robert De Niro and Oscar recipient Tommy Lee Jones, who had been considered a slim favorite over Waltz for the prize.

Taiwanese director Ang Lee pulled off a huge upset at the Academy Awards with a win for the shipwreck story "Life of Pi," taking the best director prize over Steven Spielberg, who had been favored for "Lincoln."

"Thank you, movie god," Lee said as he accepted the award.

"Argo" also claimed the Oscar for adapted screenplay for Chris Terrio, who worked with Affleck to create a liberally embellished story based on an article about the rescue and part of CIA operative Tony Mendez's memoir.

Terrio dedicated the award to Mendez, saying "33 years ago, Tony, using nothing but his creativity and his intelligence, Tony got six people out of a bad situation."

The foreign-language prize went to Austrian filmmaker Michael Haneke's old-age love story "Amour," which had been a major surprise with five nominations, including picture, director and original screenplay for Haneke and best actress for Emmanuelle Riva, who turned 86 on Sunday and would be the oldest acting winner ever.

"Brave," the Scottish adventure from Disney's Pixar Animation unit, was named best animated feature. Pixar films have won seven of the 12 Oscars since the category was added.

The upbeat musical portrait "Searching for Sugar Man" took the documentary feature prize over a lineup of sober films that included the AIDS chronicle "How to Survive a Plague," the military-rape critique "The Invisible War" and the Israel-Palestine studies "5 Broken Cameras" and "The Gatekeepers."

There was also a rare tie in one category, with the Osama bin Laden thriller "Zero Dark Thirty" and the James Bond tale "Skyfall" each winning for sound editing.

Host Seth MacFarlane opened the live Oscars telecast with a monologue that poked fun at stars and the movie industry. He offered a jab at academy voters over Ben Affleck's snub in the best director category for best-picture favorite "Argo," a thriller about the CIA's plot to rescue six Americans during the Iranian hostage crisis.

"The story was so top secret that the film's director is unknown to the academy," MacFarlane said. "They know they screwed up. Ben, it's not your fault."

William Shatner made a guest appearance as his "Star Trek" character Capt. James Kirk, appearing on a giant screen above the stage during MacFarlane's monologue, saying he came back in time to stop the host from ruining the Oscars.

"Your jokes are tasteless and inappropriate, and everyone ends up hating you," said Shatner, who revealed a headline supposedly from the next day's newspaper which read, "Seth MacFarlane worst Oscar host ever."

The musical performance-heavy Oscars also included an opening number featuring Charlize Theron and Channing Tatum, who did a classy dance while MacFarlane crooned "The Way You Look Tonight." Daniel Radcliffe and Joseph Gordon-Levitt then joined MacFarlane for an elegant musical rendition of "High Hopes." There was also another musical number called "We Saw Your Boobs," in which MacFarlane called out actresses who have gone topless in movies.

Halle Berry introduced a tribute to the Bond franchise, in which she has co-starred, as the British super-spy celebrated his 50th anniversary on the big-screen last year with the latest adventure "Skyfall." Shirley Bassey sang her theme song to the 1960s Bond tale "Goldfinger." Later, pop star Adele performed her theme tune from "Skyfall," which won the best-song Oscar.

Barbra Streisand injected some musical sentiment into the show's segment memorializing Hollywood figures who died in the past year, including composer Marvin Hamlisch, as she sang his Oscar-winning title tune from "The Way We Were."

A salute to the resurgence of movie musicals in the last decade included Oscar winners Catherine Zeta-Jones singing "All That Jazz" from "Chicago" and Jennifer Hudson doing "And I Am Telling You I'm Not Going" from "Dreamgirls." Hugh Jackman and Anne Hathaway joined cast mates of best-picture contender "Les Miserables" to sing songs from their musical.

Fans have pondered how far MacFarlane, the impudent creator of "Family Guy," might push the normally prim and proper Oscars. MacFarlane was generally polite and respectful, showcasing his charm, wit and vocal gifts.

He did press his luck a bit on an Abraham Lincoln joke, after noting that Raymond Massey preceded "Lincoln" star Daniel Day-Lewis as an Oscar nominee for 1940's "Abe Lincoln in Illinois."

"I would argue that the actor who really got inside Lincoln's head was John Wilkes Booth," MacFarlane wisecracked, earning some groans from the crowd. "A hundred and 50 years later, and it's still too soon?"