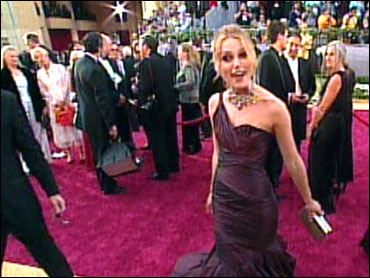 Some could argue that the real action at the Academy Awards each year is what goes on outside the Shrine Auditorium, on the catwalk, more formally known as the red carpet.

That's where the stars parade their most important fashion statements of the year, and where style experts train a sharp eye, looking for the biggest hits and misses.

"Thank you, fashion gods. You sent someone who took a risk last night," he said. "She looked beautiful in the marigold Vera Wang. The jewelry was spot on, the vintage Harry Winston. The hair was to complete perfection. The lipstick was perfect. It was a confection of perfection."

While Schwartz was also a fan of Williams' look, her best-dressed pick was Keira Knightley, nominated for "Pride & Prejudice," who also wore Vera Wang, in a wine-color with a vintage Bulgari necklace.

"She looked like a princess," said Schwartz. "Every single guy's jaw dropped. Every single woman wanted to look like her."

As for Felicity Huffman, nominated for best actress for her role in "Transamerica," Evangelista wasn't a huge fan of the plunging Zac Posen gown and thought the hair was too matronly, but Schwartz thought Huffman was a runner-up for best dressed.

"I thought it was the best she ever looked like in her life," she said.

Both guests agreed that Charlize Theron, nominated for best actress for "North Country," was one of the night's biggest fashion flops, in a deep green John Galliano, with a billowing bow on her shoulder.

"She was probably carrying a marching band under that shoulder. The bow was overwhelming," said Evangelista, who also criticized her hair style. "Someone must have teased it and not brushed it out. I expected more. I think Charlize tripped a little last night when it comes to the fashion meter."

And while Theron might have missed the mark, the very worst dressed person of the night, according to both style mavens, was Helena Bonham Carter, who wore a below the knee blue dress with white pumps.

"That outfit and the hair — disaster," said Schwartz. "And the white shoes. I mean, 'Glamour don't' written all over her forehead."

Style experts were watching closely when Jennifer Aniston made her big appearance. Always a darling of the fashion crowd, Aniston was under closer scrutiny than ever, since her news-making split from Brad Pitt. And Evangelista thought she could have done better than the streamlined black Rochas gown.

"She must still be in mourning," he said. "This is her chance to come out. I would have probably worn a red dress that said, 'I'm here, I don't care what happened to me. I am woman, hear me roar!'"

Best actress award went to Reese Witherspoon for "Walk the Line," but she got only a lukewarm fashion rating for her Christian Dior vintage gown. Evangelista thought she would have done better with an American designer.

"She's an all-American girl. It's so hard for her to wear European designers ... I thought the dress fell so flat," he said. "I would love to have seen Reese in a Ralph Lauren or Calvin Klein."

Schwartz thought the dress was beautiful, but not the most flattering cut. "I think she should go for something a little big straighter. I didn't think it was perfect for her," she said.

Naomi Watts wore an ethereal flesh-toned confection by Givenchy, which Evangelista thought was a fashion miss.

"She tripped on the fashion red carpet. It's hard for a blonde girl to wear a nude color and everything just melds into one another," he said. "You didn't get a chance to feel the whole essence of her. It was too much going on on the shoulder, the bodice. Just way too much for her."

Schwartz agreed, though she thought Watts got it at least partly right.

"I wanted to shoot her from the head up with those gorgeous David Yurman earrings," she said. "Her hair was beautiful. The top of the dress was really pretty. But, head to toe, I think it overwhelmed her, that dress."

Nicole Kidman, another fashion darling, also chose a pale color, but looked a little too bridal for the fashion experts.

"She looked like she was ready to go to her wedding in that white strapless gown," said Schwartz.

Evangelista agreed: "All she needed was a bouquet of flowers and the wedding behind her."