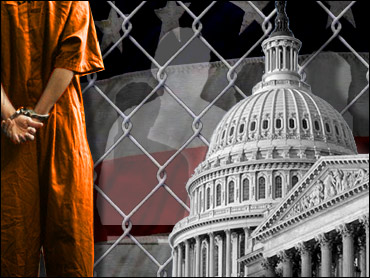 Updated May 3 with a correction

In the aftermath of the death of Osama bin Laden, both Republicans and Democrats have largely offered praise for President Obama and his handling of the complex operation that brought down one of the world's most-wanted targets.

But as details emerge about the events leading to the terrorist leader's demise, some have begun to point to the role that controversial interrogation techniques may have played in his capture - and question whether the issue should be brought back to front and center in American political discourse.

Throughout his political career, Mr. Obama has consistently been an outspoken opponent of harsh interrogation techniques; just days after his 2009 presidential inauguration, the president issued an executive order barring the use in interrogations of waterboarding (which he has condemned as "torture") - or any other method not explicitly set out in the U.S. Army's field manual.

The position, along with his pledge to shut down the Guantanamo Bay military prison, signaled a departure from the George W. Bush administration with regard to the handling and interrogation of terror suspects.

Yet reports suggest it was through intelligence gathered in Guantanamo Bay and overseas prisons that led to the discovery of Osama bin Laden's location - and ultimately, his death. According to the Washington Post, some of those detainees may have been subjected to the so-called "enhanced interrogation techniques" that many decry as inhumane.

At least one Republican was quick to spotlight the issue. In a Tweet on Monday morning, Rep. Steve King (R-Iowa) wondered, sarcastically, "Wonder what President Obama thinks of water boarding now?"

According to the New York Times, U.S. officials were tipped off about the pseudonyms of two bin Laden couriers by detainees during interrogations at Guantanamo Bay in 2007.

The Associated Press reports that one of the informants was Khalid Sheikh Mohammed, the mastermind behind the 9/11 attacks, who was notoriously waterboarded multiple times while interrogated by the CIA. Abu Faraj al-Libi, who served as Mohamed's successor, reportedly provided similar information.

In a conference call on Sunday night, a senior White House official spoke of "detainees in the post-9/11 period" who "flagged for us individuals who may have been providing direct support to bin Laden and his deputy, Zawahiri, after their escape from Afghanistan."

"One courier in particular had our constant attention," the official continued. "Detainees gave us his nom de guerre or his nickname and identified him as both a protégé of Khalid Sheikh Mohammed, the mastermind of September 11th, and a trusted assistant of Abu Faraj al-Libbi, the former number three of al Qaeda who was captured in 2005."

"Detainees also identified this man as one of the few al Qaeda couriers trusted by bin Laden," the official continued. "They indicated he might be living with and protecting bin Laden. But for years, we were unable to identify his true name or his location."

If it does turn out that the information was extracted through enhanced interrogation methods, it may be seen as vindication for backers of such techniques.

"We got beat up for it, but those efforts led to this great day," said retired CIA officer Marty Martin, of the controversial interrogation tactics, according to the Associated Press.

"If that information did in fact come from Khalid Sheikh Mohammed - which helped lead them to this individual the courier, which led them to that compound - then I think you would have to conclude that the enhanced interrogation techniques which we used... may have played a role in the ultimate capture of Osama Bin Laden," said CBS News' Chris Isham on CBSNews.com's "Washington Unplugged."

Mohammed, Isham added, was "water-boarded on many many occasions, and we know that was instrumental in breaking him."

Former President Bush, however, made no mention of the issue in a Sunday night statement on bin Laden's death.

"Earlier this evening, President Obama called to inform me that American forces killed Osama bin Laden, the leader of the al Qaeda network that attacked America on September 11, 2001," he said. "I congratulated him and the men and women of our military and intelligence communities who devoted their lives to this mission. They have our everlasting gratitude."

"This momentous achievement marks a victory for America, for people who seek peace around the world, and for all those who lost loved ones on September 11, 2001," Bush added. "The fight against terror goes on, but tonight America has sent an unmistakable message: No matter how long it takes, justice will be done."

This article initially stated that Khalid Sheikh Mohammed was waterboarded by the CIA in 2006. In fact, the waterboarding occurred earlier than that, according toCIA memos.