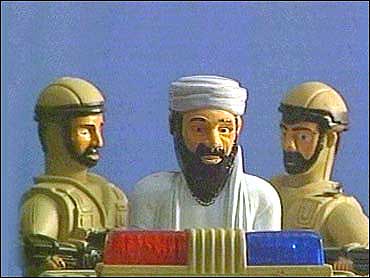 Toy crazes are a common theme in the build up to Christmas holidays in the West - with certain 'must-have' presents.

Think back to the frenzy stirred by the Cabbage Patch Kids or the fever incited by Sesame Street's Elmo doll.

These 'essential' toys disappear off shelves in a flash, with parents queueing up for hours or even coming to blows to make sure their offspring has the latest thing.

The story is no different in the Muslim world with the approach of Eid ul Fitr, the festival that marks the end of the month of Ramadan. But one of this year's 'must-haves' would probably be banned from sale in many parts of the West. It's a distinctive, bearded figurine, riding 'shotgun' in a military jeep.

The Osama bin Laden action figure, complete with military jeep and bodyguards, is proving to be a big hit with mothers and fathers buying holiday presents for their youngsters.

"As you know, Osama is very popular in the whole world," said Imran, a young boy eyeing up the goods on offer at a Karachi toy store. "The same thing is happening in Pakistan.

"People like him, and he has become a celebrity now."

According to a toy stall holder, Naseer, some parents were even paying up to $4.00 in advance to insure they could become the proud owners of one of the dolls.