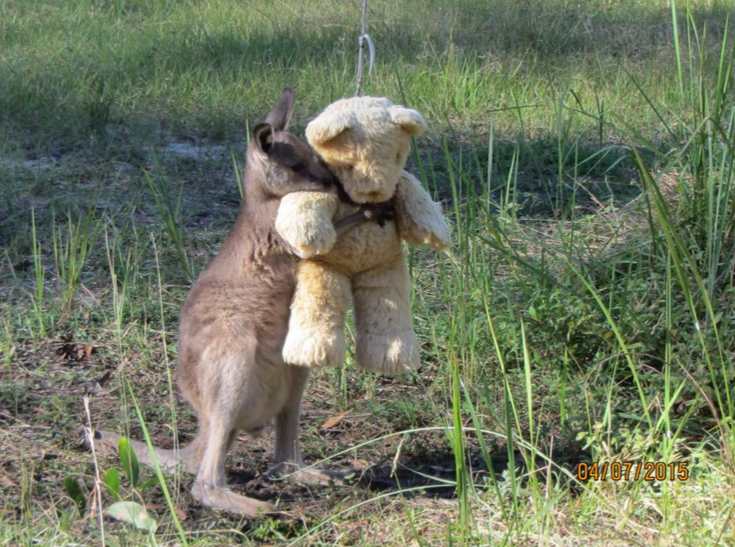 "Doodlebug" weighed just about 3 1/2 pounds when he was found on the side of a road in Grafton, New South Wales, in southeastern Australia.

It has now been months since the baby kangaroo was rescued. Tim Beshara and his mom, Gillian Abbott, still wonder why he was left on his own.

"We don't know whether his mother had died either through a car accident or a dog attack, or whether he simply was abandoned," Beshara told CBS News.

Either way, it looks like the now 15-month-old kangaroo is finally finding a way to cope.

"The kangaroo will lay in the grass next to the teddy, will cuddle the teddy and even practice his kicking against the teddy," Beshara said.

This week, a photo of the best friends went viral.

"My mum (a wildlife-carer) sent me this. Showing the value of a good hug, especially for an orphaned wallaby. #wildoz," Beshara tweeted on Tuesday.

The tweet was shared more than 3,300 times and received hundreds of comments.

Abbott, a retired worker from Grafton, New South Wales, spends her spare time caring for orphaned or injured animals on her small forested property. That's how she met Doodlebug -- and how her son, an adviser to an Australian senator, and the adorable animal were introduced.

Doodlebug is currently undergoing a "soft release," which means he can hop off into the forest whenever he wants, but he will occasionally still return for feeding.

"My mum still sees him most days," he said, explaining that the "joey" enjoys hopping around his mom's forested property. "She is thankful that this image is providing joy to so many people around the world."

The "world" also thanked Abbott -- and her son -- for sharing the joyful moment.