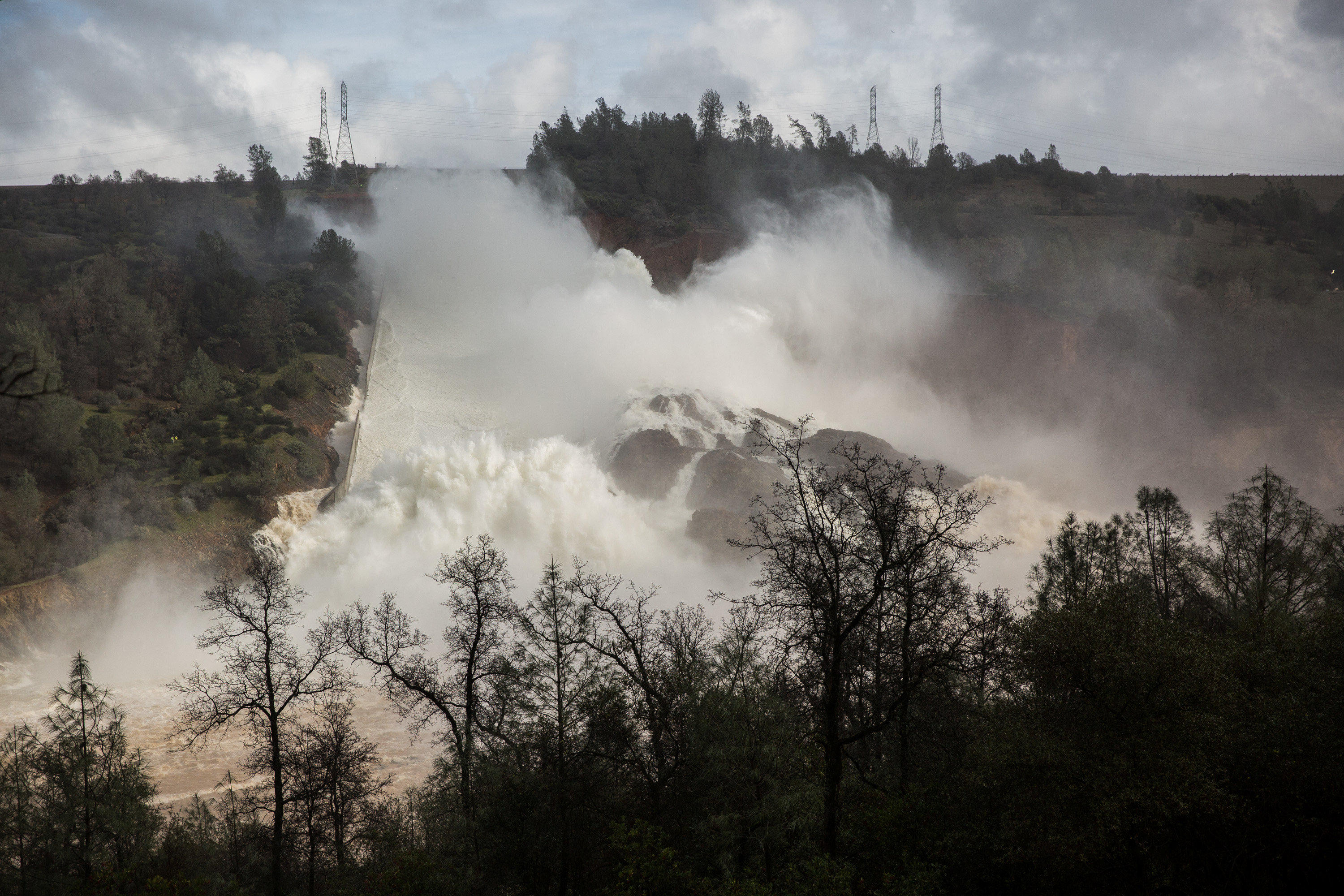 Environmental activists and local government officials warned more than a decade ago about the risk of catastrophic flooding below a major Northern California dam -- the very scenario that threatened to unfold over the weekend, prompting evacuation orders for nearly 200,000 people.

State and federal regulators dismissed those fears at the time, saying they were confident the hillside that helps hold back hundreds of billions of gallons of water was stable and did not need to be reinforced with concrete.

That decision has come under scrutiny now that the hillside -- or emergency spillway, as officials call it -- has been put to its first test in the Oroville Dam’s nearly 50-year history.

Over the weekend, water from the storm-swollen lake behind the dam spilled down the unpaved slope for 38 hours, eroding it enough that authorities feared a huge breach could open and send a 30-foot-high surge of water down the Feather River below, devastating thousands of homes.

The danger eased Monday as the water level behind the dam dropped, but more rain was in the forecast, and residents as far as several dozen miles downriver in Yuba City were advised to stay out of their homes because of flood danger.

Butte County Sheriff Kory Honea said, according to the Reuters news agency, that the risk to residents in the Feather River valley was still under review.

“We need to have time to make sure that before we allow people back into those areas it is safe to do so,” Honea said.

At 770-feet, Oroville Dam is the nation’s tallest. It stands about 70 miles north of Sacramento in the foothills of the northern Sierra Nevada.

In 2005, at the start of the dam’s still-unfinished relicensing process, environmental groups asked federal regulators to require that the California Department of Water Resources “armor” the hillside -- or reinforce it, typically with concrete or boulders -- to prevent potentially catastrophic erosion from water escaping when the reservoir was cresting over full capacity.

The groups said rocks and other debris could be swept into the river, damaging highway bridges and power plants downstream. In a worst case, they warned, a major breach would unleash floods that could take lives and destroy property.

Also in 2005, officials with Sutter County, which the Feather River runs through several dozen miles downstream of the dam, asked federal regulators to “investigate the adequacy and structural integrity” of the hillside and how it would hold during “extreme flood releases.”

“I think that the warning that was given should have been taken with the utmost seriousness,” said Bob Wright, an attorney at Friends of the River, which raised the issue along with the Sierra Club and South Yuba River Citizens League.

Bill Croyle, acting head of the Department of Water Resources, refused to comment on the 2005 concerns, saying he was not familiar with them and would need to research the matter.

Speaking late Monday at the state’s emergency-operations center in Sacramento, Gov. Jerry Brown also said he had not known of the warnings about the emergency spillway, and said public officials depend on the recommendations of their engineers. “They tell us what we need and we do it,” Brown said.

“But we live in a world of risk,” Brown added. “Stuff happens and we respond.”

Last week, officials tried to relieve pressure on the dam by releasing a torrent of water through an adjacent, concrete-lined primary channel designed to handle heavy flows. When the deluge gouged out hundreds of feet of the concrete bottom, dam managers eased off those controlled releases. Water then began spilling down the hillside.

Back when environmentalists and local officials were raising their concerns, the water resources department dismissed the need to fortify the hillside, insisting it would not be in danger if water cascaded down it.

The hillside was designed to handle the “probable maximum flood,” and annual dam inspections include a review of the spillway’s structural integrity, according to a May 2006 filing by the Metropolitan Water District of Southern California and other water agencies in the state that could have been in line to help pay for the upgrades to the dam. The cost of reinforcing the hillside was not immediately clear.

In the filing, the water agencies told federal regulators that environmentalists and local officials did not show that the emergency spillway posed a public risk.

As part of the relicensing application, state water resources department officials wrote in a final environmental impact report dated June 2008 that no “significant concerns” about the hillside’s stability had been raised in any government or independent review.

The Federal Energy Regulatory Commission, the agency that oversees the dam’s relicensing and received the request for armoring, agreed that paving was not needed. An agency spokeswoman said the original, 50-year license for the dam expired in January 2007, but it has been automatically renewed each year pending a full renewal

“We have just, in December 2016, received all the necessary permits and other documents we need before issuing a final decision on the application,” spokeswoman Mary O’Driscoll said. She would not answer other questions about the relicensing application.

In a July 2006 memo to managers, first reported by The Mercury-News, a senior civil engineer with the agency’s San Francisco office wrote that the agency determined dam safety “would not be compromised in the rare event of an emergency spillway discharge.”

Engineer John Onderdonk also wrote that, “it is acceptable for the emergency spillway to sustain significant damage.”