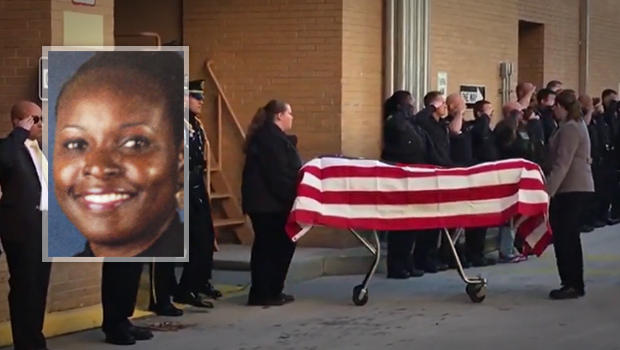 ORLANDO, Fla. - A manhunt has been launched after a police officer was shot and killed Monday morning near an Orlando Walmart, officials said.

Police said Orlando Master Sgt. Debra Clayton was approached Monday morning at around 7 a.m. by a person who recognized Markeith Loyd, a man suspected of killing his pregnant ex-girlfriend in December. The witness pointed Clayton toward Loyd, and the sergeant called dispatch to announce she was approaching the suspect. Moments later, a man believed to be Loyd shot Clayton multiple times. She died soon after.

Loyd fled the scene, hijacking a car, and firing at least two shots at a pursuing police vehicle. He then abandoned the first car he hijacked and stole another, according to police.

During the manhunt, an Orange County Sheriff’s deputy was killed in a motorcycle accident. The Florida Highway Patrol confirmed to CBS News that the deputy, identified as Deputy First Class Norman Lewis, was involved in the manhunt at the time of the crash. Clermont, Florida resident Billie Jarrard allegedly “turned into the direct path” of the deputy, am 11-year veteran. The Florida Highway Patrol said in a statement that charges are pending against Jarrard.

Orlando Police Chief John Mina said during a Monday morning press conference that Clayton, a 17-year veteran, was well-known on the force.

“She organized several marches against violence by herself. That’s how dedicated she was,” Mina said.

Police announced on Monday a reward of up to $60,000 for information leading to Loyd’s arrest. Mina said during a Monday afternoon press conference that if Loyd is arrested, he will be charged with first degree murder of a law enforcement officer and attempted murder of a law enforcment officer. Authorities have so far searched dozens of apartments and houses in their search for Loyd, who police believe has received assistance during his flight.

Orange County Sheriff Jerry Demings said police had circulated Loyd’s image in the community because of the previous murder case, in which 24-year-old Sade Dixon was shot and killed, and officers had been on the lookout for him.

“That indicates to me he is receiving help,” Demings said.

Loyd previously spent four years in prison for battery of a law enforcement officer and resisting arrest with violence. He was sentenced to 27 months in prison in 2011 for possessing homemade weapons while in federal custody.

He was also charged in a 1995 murder case, but those charges were dropped.