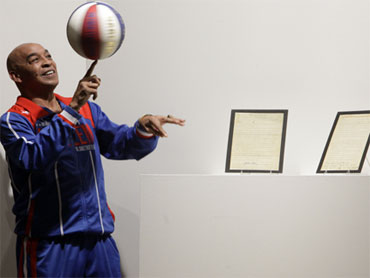 A historic document that details the original rules of basketball, written 119 years ago as a winter sport for boys of a Massachusetts YMCA, was sold for more than $4 million on Friday to raise money for charity.

James Naismith wrote the 13 rules while a physical education instructor at the Christian association.

"Basketball is a pure invention," said Selby Kiffer, senior specialist in American history documents at Sotheby's, where the rules were being sold by the Naismith International Basketball Foundation.

"It's really the genesis, the birth certificate of one of the world's most popular sports," he said in October when the sale was announced. "It's a sport that has had an impact on everything from fashion, such as sneakers, to culture that in a way transcends sports.

The sale price of $4.3 million includes a buyer's premium. The proceeds will benefit the Naismith foundation, which promotes sportsmanship and provides services to underprivileged children around the world.

Ian Naismith, the foundation's founder and grandson of James Naismith, told The Associated Press in an interview in October that it was a family decision to put the rules on the auction block and give the money to the Naismith charity.

"It's what Dr. Naismith wanted," he said.

James Naismith penned the 13 rules on Dec. 21, 1891, for the YMCA training school in Springfield. His boss had given him two weeks to come up with a new indoor activity for his gym class, and he wrote down the rules on the eve of that deadline.

He gave the list to his secretary, who typed them up on two pages that Naismith pinned on a bulletin board outside the gym.

He moved to Lawrence, Kan., in 1898 and became the first basketball coach at the University of Kansas. He coached for nine seasons before assuming other academic duties and serving as athletics director.

One of his players was Forrest "Phog" Allen, who went on to become popularly known as the "father of basketball coaches."

The two are memorialized on the University of Kansas campus, where the basketball court at Allen Fieldhouse is named James Naismith Court.

Naismith died in 1939, three years after his new game became an official sport at the 1936 Summer Olympics in Berlin.