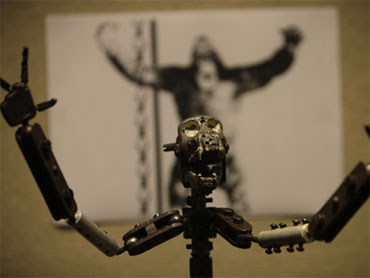 He was a giant on screen, but the King Kong figurine which climbed to the top of the Empire State Building in 1933 was less than 2 feet tall.

The sale was part of Christie's auction of pop culture memorabilia, featuring pictures, posters and props from dozens of classic films, including "Star Wars," "Alien," and a bevy of James Bond titles.

The 22-inch skeleton of Kong was used in the film's climax, when Kong climbs to the top of New York's tallest building with Fay Wray (or rather, a puppet of Wray) in tow.

The interlocking ball and socket joints allowed precise manipulation of the model, which was manipulated and shot frame-by-frame to simulate movement.

The model's metal skeleton was originally covered in cotton, rubber, liquid latex and rabbit's fur, but over the years the covering has rotted away.

Other Kong figures were constructed for the Skull Island scenes, but this model - obtained by a film fan when RKO Studios was closing shop - is a rarity, figuring in one of Hollywood's most iconic scenes.

O'Brien, who was an innovator in stop-motion animation and special effects, is also credited with the dinosaur effects of "The Lost World," "Song of Kong," "Behemoth the Sea Monster," and "Mighty Joe Young," for which he won the Academy Award.

There was no Academy Award category for special effects in 1933.