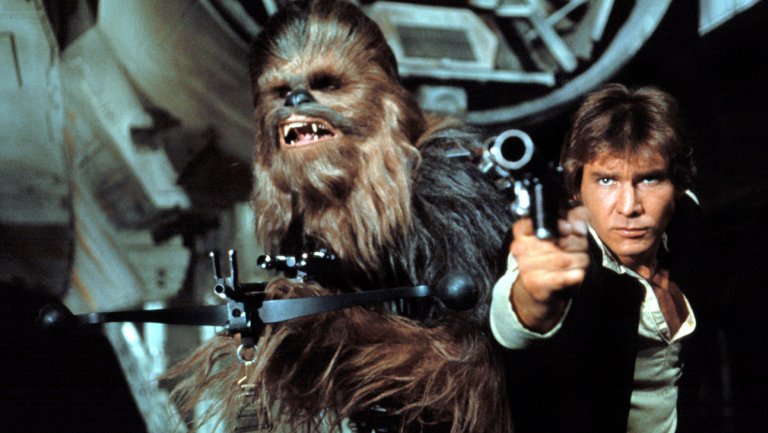 When George Lucas' "Star Wars" first landed in 1977, some critics were swept away, while others resisted the tide. A sampling:

"'Star Wars' is like getting a box of Cracker Jacks which is all prizes. This is the writer-director George Lucas's own film, subject to no business interference, yet it's a film that's totally uninterested in anything that doesn't connect with the mass audience. There's no breather in the picture, no lyricism; the only attempt at beauty is in the double sunset. It's enjoyable on its own terms, but it's exhausting, too: like taking a pack of kids to the circus. ... It's an epic without a dream." - Pauline Kael, The New Yorker.

"'Star Wars' taps the pulp fantasies buried in our memories, and because it's done so brilliantly, it reactivates old thrills, fears, and exhilarations we thought we'd abandoned when we read our last copy of Amazing Stories." - Roger Ebert, Chicago Sun-Times.

"Strip 'Star Wars' of its often striking images and its high-falutin scientific jargon, and you get a story, characters, and dialogue of overwhelming banality, without even a "future" cast to them. Human beings, anthropoids, or robots, you could probably find them all, more or less like, that, in downtown Los Angeles today... O dull new world!" - John Simon, New York magazine.

"'Star Wars' ... is the most elaborate, most expensive, most beautiful movie serial ever made. It's both an apotheosis of 'Flash Gordon' serials and a witty critique that makes associations with a variety of literature that is nothing if not eclectic: 'Quo Vadis?' 'Buck Rogers,' 'Ivanhoe,' 'Superman,' 'The Wizard of Oz,' 'The Gospel According to St. Matthew,' the legend of King Arthur and the knights of the Round Table. ... One of Mr. Lucas's particular achievements is the manner in which he is able to recall the tackiness of the old comic strips and serials he loves without making a movie that is, itself, tacky." - Vincent Canby, New York Times.

"The only way that 'Star Wars' could have been interesting was through its visual imagination and special effects. Both are unexceptional. ... I kept looking for an 'edge,' to peer around the corny, solemn comic-book strophes; he was facing them frontally and full. This picture was made for those (particularly males) who carry a portable shrine within them of their adolescence, a chalice of a Self that was Better Then, before the world's affairs or - in any complex way - sex intruded." - Stanley Kauffmann, the New Republic.

"'Star Wars' is Buck Rogers with a doctoral degree but not a trace of neuroticism or cynicism, a slam-bang, rip-roaring gallop through a distantly future world full of exotic vocabularies, creatures and customs, existing cheek by cowl with the boy and girl next door and a couple of friendly leftovers from the planet of the apes and possibly one from Oz (a Tin Woodman robot who may have got a gold-plating as a graduation present)." - Charles Champlin, Los Angeles Times.