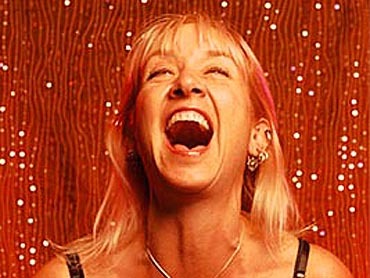 (CBS) Is it possible to bring yourself to orgasm just by thinking?

Barbara Carrellas more than thinks so. She says she knows so, since she's been "thinking herself off" for more than twenty years.

It's a technique she learned in the late 1980's, when she was managing off-Broadway plays in New York. It was the height of the AIDS crisis, which hit the theater community particularly hard. She saw friends get sick and die on a  regular basis.

Carrellas says that she wanted to explore alternative ways of being sexual. She went to an informal workshop to learn how to orgasm using nothing but her mind.

"I wasn't embarrassed," says Carrellas, who knew most of the other participants from a support group for people with AIDS and the friends of people with the virus. "I was just afraid that I wouldn't get it and everyone else would."

But "get it" she did, and she is now a true believer. "I really like solo sex," she tells CBS News. "I am not partner-fixated. Society has an extremely limited view of what sexuality is."

Carrellas is featured in a new "Strange Sex" series on TLC, but her brand of sexual pleasure may not be as strange as one might think. Researchers at Rutgers University have been studying the mind-body-sex connection, and have found that there seems to be documented evidence of Carrellas' claims. They put her in an MRI, had her "think off" and found that the parts of her brain that should light up when she climaxes did just that.

The idea of thinking yourself to orgasm is not new. In the early 1970's, the Masters and Johnson research team documented the strong connection between sexuality and thought.

The connection is particularly strong in women, says Dr. Ian Kerner, author and sex therapist. "The brain is the most powerful sex organ," he says. Men, he adds, have a much harder time making themselves climax without any touch whatsoever, but there are documented cases in women.

"I would encourage people to try to use breath work, concentration and fantasy, but more to enhance their sex life, and less as a means to an end," says Kerner. That's because most people will find themselves frustrated, because most people won't be able to go as far as Carrellas, he says.

Carrellas, who prefers the gentler term "breath and energy orgasm," has a different opinion.

"Anyone can learn this," she says. You just have to un-teach yourself what you've probably absorbed all your life," she explains. It starts with our first experiences touching ourselves as kids.

"When we are young, we learn the 'quiet and quick' rule - so that we don't get caught. And the only way to climax that way is to hold your breath." But actually, she says, one can experience much richer, much more satisfying orgasms by breathing deeply, which is one of the techniques she uses to "think off."

Carrellas, who is in a relationship, doesn't use breath and energy to the exclusion of traditional sex. "My definition of what sex is has expanded so that genital sex is just one part of the repertoire," she says. Anyway, she says, you can think off with a partner. One way is to hold hands, maintain eye contact, and breathe together, fully clothed.

"It can be quite mind-blowing," she says. Carrellas not only practices this at home, she guest lectures at colleges. "I want young people to have more safer-sex options," she says.

Want to see for yourself how it's done? Carrellas will be featured on TLC this Sunday as part of their "Strange Sex" series. The thinking orgasms start at 10:30 p.m. EST.