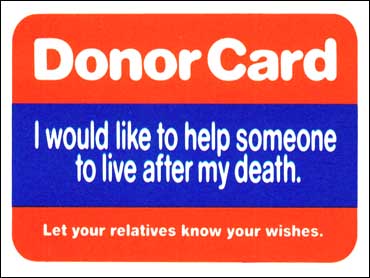 Families agree to donate organs from brain-dead patients more than half the time, but that is far from enough to meet the growing need for transplants, new research shows.

Even if organs were harvested from all the potential brain-dead donors for transplants, there wouldn't be enough to go around, the researchers concluded after reviewing hospital records from around the nation.

They estimated the number of organ donor candidates each year at between 10,500 and 13,800 from the nation's 1 million hospital deaths. Previous estimates varied as high as 26,000.

There are 82,000 people on the nation's waiting list for transplants.

"It's a game of small numbers and every opportunity needs to be maximized," said Ellen Sheehy, who led the study for the Association of Organ Procurement Organizations, which represents organ banks.

The findings appear in Thursday's New England Journal of Medicine.

Thirty-six of the nation's 59 organ banks participated in the study. They checked hospital records for all patients who died in intensive care units from 1997 to 1999 to see how many met the criteria for organ donations and how many became donors.

Most transplanted organs come from patients who die because their brain stops functioning, although the number of living donors - especially for kidneys - has sharply increased.

Overall, 54 percent of families agreed to donate their loved one's organs, an increase from a consent rate of 48 percent in a 1990 study, and 42 percent actually became donors.

"One of the questions is, `Is the glass half full or half empty?"' said Sheehy. "While I think everyone agrees that there's still room to improve, the idea is not that we're going to get to 100 percent."

She said polling suggests that 75 percent of Americans would donate their organs.

The researchers also reported that consent wasn't sought for 16 percent of the patients they deemed potential donors. That has recently improved, Sheehy said, because of 1998 Medicare regulations requiring hospitals to alert organ banks of all deaths for evaluation.

There were lower rates of consent for older patients, nonwhites and those who died of causes other than trauma.

The researchers suggested that efforts to improve consent rates should be concentrated at larger hospitals since most of the candidates were found at those with 150 beds or more. One government program is compiling the best techniques from the most successful hospitals to share.

"We have to identify those people. We have to get everybody to say yes. But even then it's not going to solve the problem," said Dr. J. Harold Helderman of Vanderbilt University Medical School, who was the co-author of an accompanying editorial.

He said alternative sources of organs, including animals, have to be explored along with ways to keep people off transplant lists with better treatment for disease and anti-rejection drugs.

One potential way of increasing donations is for hospitals to follow the wishes of the patient, even if their family says no. Although some states allow it, hospitals are reluctant to do it and antagonize the family, Helderman said. That's why it is important for families to discuss organ donation and whether they'd want to be a donor, he said.

"If we're perceived as stealing organs out of patients against their family's wishes, people are not going to be organ donors," he said.

In addition to donor cards or driver's license notations, some states have started donor registries that organ banks can check. Many of the registries are too new to determine their impact on donations, said Carol O'Neill of the organ banks' association.

Governors to decide who gets vaccines first, health secretary says

Alex Azar says Moderna and Pfizer vaccines may receive FDA approval and be ready for use before Christmas.