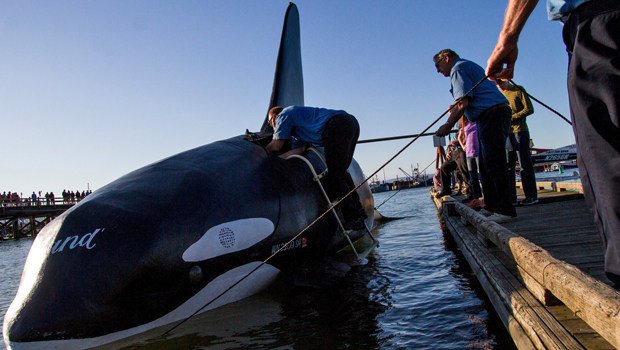 ASTORIA, Ore. -- An effort to use a fake, life-sized orca to scare off hundreds of sea lions crowding docks off the Oregon coast ended, at least temporarily, with the fiberglass creature belly-up after it was swamped by a passing ship.

Still, Port of Astoria Executive Director Jim Knight said the sea lions briefly "got deathly silent" when the orca sailed into view. That was just before it started listing and tipped over Thursday night.

Once the 32-foot killer whale replica is dried out and repaired, "There's a chance we'll do it again" Friday, Knight said.

Earlier Thursday, officials had to find a replacement motor for the fake orca - actually a boat with a driver inside - that belongs to a whale watching business. It was brought overland from Bellingham, Washington.

Sea lions have become a nuisance to Astoria and commercial fishermen because they damage docks, prevent boaters from using the docks and eat lots of salmon.

Knight took the day's adventure in stride, calling it "a learning experience."

Once equipped with the replacement motor, the fake orca "was going fairly well and then a cargo ship came by and its wake swamped the whale," he said. "Our crew from the port had to go rescue the operator so he didn't drown.

"You can't make this stuff up," he added.

He estimates 1,000 people showed up to watch, applauding as the bogus whale took to the water.

As for the sea lions, there may have been an effect beyond their brief silence. Knight said there were 400 to 500 sea lions Thursday morning and perhaps 200 by Thursday night, when the fake orca was tied up to the docks where they rest.

"They probably think it's dead now that it's belly up."

Knight wishes the orca had gotten a chance to play its recordings of real killer whale calls, especially the "call to dinner" - usually emitted in the wild after they kill a sea lion or seal.

The original plan called for the orca to be driven around in the waters near Astoria, free of charge to the port. It can also tow a smaller, 7-foot-long orca behind it.

In recent weeks, the Port of Astoria has tried creative ways to keep the animals away, including installing beach balls, colorful tape, chicken wire and electrified mats. Of those, Knight said the beach balls have been the least expensive solution with initially the best results.

"There's something about flashing, moving bright colors that (sea lions) don't like," he said. "They jumped off the docks."

He said the beach ball idea could be revived.

The sea lion population has increased dramatically in recent decades. The animals are protected under the Marine Mammal Protection Act, but the law includes provisions allowing for deterrence of the sea lions to protect private property.

The Astoria sea lion population is dwindling at the moment as many of them follow the salmon migration north. However by mid-August, they'll be back in force, Knight said.