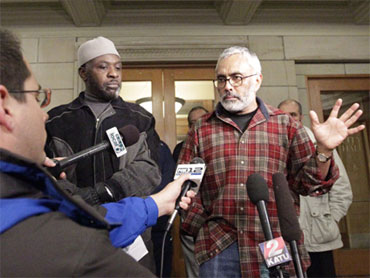 Muslim leaders called on authorities to step up protection for the region's Islamic community, days after a Somali-American man was accused of trying to blow up a van full of explosives during Portland's Christmas tree lighting ceremony.

The plea followed a fire Sunday at the Islamic center where suspect Mohamed Osman Mohamud occasionally worshipped, prompting an FBI arson investigation and concern about the potential for more retaliation.

Somali leaders in Oregon - a state that has been largely accepting of Muslims - gathered with Portland city leaders Sunday evening to denounce violence and call for help for at-risk Somali youth.

"We left Somalia because of war, and we would like to live in peace as part of the American community," said Kayse Jama, executive director of a local organization founded after the 9/11 attacks to fight anti-Muslim sentiment. "We are Portlanders. We are Oregonians. We are Americans, and we would like to be treated that way. We are your co-workers, your neighbors."

Mohamud, 19, was being held on charges of plotting to carry out a terror attack Friday on a crowd of thousands at Portland's Pioneer Courthouse Square. He is scheduled to appear in court Monday afternoon.

CBS News correspondent Ben Tracy reports the 18-month FBI sting operation tracked Mohamud as he planned the attack and purchased what he thought were bomb-making materials from undercover federal agents.

The FBI even oversaw what Mohamud thought was a practice run -allowing him to blow up a backpack full of real explosives in a remote location, says Tracy. He planned last Friday's attempt for maximum impact, bragging to undercover agents, "it's gonna be a fireworks show... the New York Times will give it two thumbs up."

His attorney, Stephen R. Sady, who has represented terrorism suspects held at the U.S. prison at Guantanamo Bay, didn't return a telephone message left Sunday by The Associated Press.

The suspect's mother, Maryan Hassan, declined to discuss the issue when contacted by phone late Sunday by the AP, referring all questions to Sady. His father also refused to comment.

Omar Jamal, first secretary for the Somali mission to the United Nations in New York City, told The Associated Press his office has received "thousands of calls" from Somalis in the United States who are concerned about tactics used by federal agents in the sting operation against Mohamud.

An FBI affidavit said agents began investigating after receiving a tip from an unidentified person who expressed concern about Mohamud.

An agent e-mailed Mohamud, pretending to be affiliated with one of the people overseas whom Mohamud had tried to contact. Undercover agents then set up a series of face-to-face meetings with Mohamud at hotels in Portland and Corvallis.

Authorities said they allowed the plot to proceed to obtain evidence to charge the suspect with attempt.

Jamal said there is concern in the Somali community that Mohamud was "lured into an illegal act."

"Rest assured that the community is very against anyone who tries to do harm to the citizens of this country," he said. But many Somalis in the United States are wondering whether Mohammud's rights were violated by federal agents, he said.

Why "did they tell him to go along with this heinous crime?" Jamal said.

The FBI affidavit said it was Mohamud who picked the target of the bomb plot, that he was warned several times about the seriousness of his plan, that women and children could die, and that he could back out.

Officials said Mohamud had no formal ties to foreign terror groups, although he had reached out to suspected terrorists in Pakistan.

CBS News security consultant Juan Zarate says Mohamud may have been radicalized via the Internet, where countless web forums, chat rooms and videos provide information, inspiration and even links to terror groups. He says the web can give young, disillusioned Americans citizens "a sense of purpose, in some cases a heroic outlet."

Fortunately, adds Zarate, "the FBI has done a good job of late of getting close to individuals who express an intent to carry out atttacks and kill their fellow citizens."

After the FBI got a tip about Mohamud, an agent e-mailed him over the summer, pretending to be affiliated with an "unindicted associate" whom Mohamud had tried to contact.

Agents had some face-to-face meetings with Mohamud. On Nov. 4, in the backcountry along Oregon's coast, they convinced him that he was testing an explosive device - although the explosion was controlled by agents.

On Friday, an agent and Mohamud drove into downtown Portland in a white van that carried six 55-gallon drums with detonation cords and plastic caps, but all of them were inert.

Mozafar Wanly, father of the imam at the Salman Al-Farisi Islamic Center in Corvallis, said the fact that Mohamud was e-mailing someone in Pakistan shows nobody in the U.S. supported his extremist ideology.

"He's reaching for people outside because he doesn't find any terrorists here," he said.

The fire at the center was reported at 2:15 a.m., and evidence at the scene led authorities to believe it was set intentionally, said Carla Pusateri, a fire prevention officer for the Corvallis Fire Department.

Authorities don't know who started the blaze or why, but they believe the center was targeted because Mohamud sometimes worshipped there.

Arthur Balizan, special agent in charge of the FBI in Oregon, said there's no conclusive link to the bombing in Portland or specific evidence that it's a hate crime, other than the timing.

There were no injuries in Sunday's fire, which burned 80 percent of the center's office but did not spread to worship areas or any other rooms, said Yosof Wanly, the center's imam.

In Portland, residents are alarmed by the terror plot, but Mayor Sam Adams said they are "not going to let this change our values of being an open and embracing city." He said that he beefed up patrols around mosques "and other facilities that might be vulnerable to knuckle-headed retribution" after hearing of the bomb plot.

"Just as American Muslims repudiate any act that would threaten our nation's safety and security, we ask our fellow citizens to reject any attacks on Muslims or their religious institutions," said Arsalan Bukhari of the Seattle chapter of the Council on American-Islamic Relations.

The FBI was working closely with leadership at the Corvallis center as agents investigated the fire, Balizan said. The bureau has established a telephone tip line and a $10,000 reward has been offered for information leading to an arrest.

Wanly said Mohamud moved to the U.S. from Somalia as a young boy. Mohamud graduated from high school in the Portland suburb of Beaverton and attended Oregon State University but dropped out on Oct. 6.

He described Mohamud as a normal student who went to athletic events.

Tyler Napier, 17, who lived next door to the family for three years, told Portland's KGW-TV that he used to play pickup basketball with Mohamud.

"We would always be outside playing in the street together," he said. "It's really scary to think about . . . I talked to him, went to school with him, now he's trying to blow up the Square - it's like a reality check I guess."

Alex Masak, a classmate of Mohamud's at Westview High School in Beaverton, told KPTV that he recently received a strange message from him, out of the blue.

"He texted me asking if I knew of any places where he could shoot guns off where nobody would hear," said Masak. "I didn't think much of it," he said.