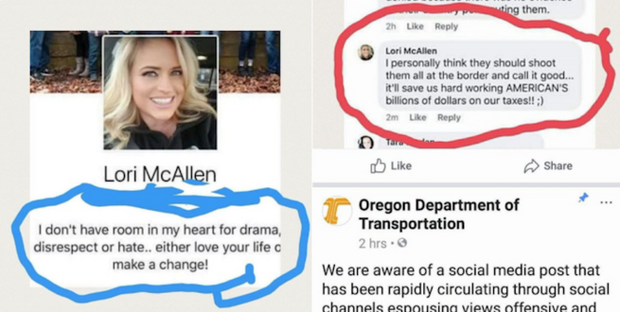 An Oregon woman who works at the DMV has come under fire for comments she purportedly made on Facebook. Lori McAllen's Facebook page is currently untraceable, but a screenshot of the comment has been widely shared online. It says she thinks immigrants crossing into the U.S. should get shot at the border.

In her bio on Facebook, McAllen wrote, "I don't have room in my heart for drama, disrespect or hate." But she seemed to have a very different attitude when discussing immigration policy in the comments section of a Facebook post.

"I personally think they should shoot them all at the border and call it good... it'll save us hard working AMERICAN'S billions of dollars on our taxes!!" she wrote. She ended the remark with a winking emoticon.

The screenshots have gone viral, and the agency where she works has gotten a barrage of complaints about it. Thousands of people shared the photo of McAllen's remark, and many called on the Oregon Department of Transportation to fire her.

"We received thousands of posts online and probably more than 100 phone calls," Dave Thompson, a spokesman for Oregon DOT, told CBS News on Thursday. "The social media posts were coming in fast and furious -- it went viral."

Thompson said the department's HR investigation of McAllen is still ongoing, and they are trying to authenticate the Facebook post. "HR is talking to her to determine if that was really her who wrote it," he said. "When I looked for [her Facebook page] at about 7:30 yesterday morning, it was already gone. I don't know if she took it down or somebody else did, but it's gone," Thompson said.

Oregon DOT sent out a tweet about the situation Thursday, saying: "An employee linked to an offensive Facebook post is on leave while we investigate. We take this matter very seriously and very personally. The comment doesn't reflect our agency values and is disturbing and hurtful. Thank you for your patience as we complete the investigation."

In an earlier tweet Wednesday, it called the immigration comment "offensive & abhorrent to the values of our agency."

In his phone call with CBS News, Thomson reiterated that sentiment. "We are offended and hurt by such a post -- no matter who made it -- that does not reflect the values of the people who work here," he said. Thompson also said the department had decided to put McAllen on administrative leave until the investigation is complete and an decision is made.

McAllen has worked at the Department of Motor Vechicles division of the DOT for 10 months, Thompson said. She was hired as a DMV clerk.

The comment about shooting immigrants at the border comes amid widespread concern over migrants the U.S.-Mexico border and outrage over the Trump administration's policy of separating children from their parents, which the president suspended with an executive order Wednesday.