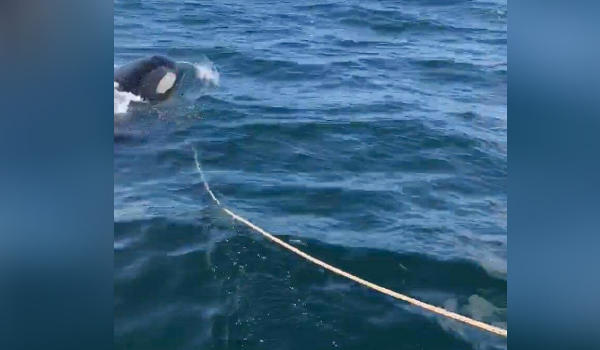 SITKA, Alaska -- An Alaska man said his boat was attacked over the weekend by an orca during a salmon fishing excursion with his 14-year-old son and two other people.

Victor Littlefield of Sitka said the killer whale repeatedly rammed the boat, yanked its anchor line and slapped the boat's bow with its tail.

The 33-foot aluminum boat lurched to one side during the attack, Littlefield said in an interview. The event happened while it was anchored Sunday near Little Biorka Island in southeastern Alaska.

Littlefield had seen the movie, "Jaws" the previous day and initially thought his boat was being attacked by a great white shark, the Daily Sitka Sentinel reported.

But the culprit was an aggressive orca. Littlefield's black Labrador Retriever, Roscoe was lying on a commercial ice box on the boat and Littlefield said he wondered if the whale was going after the dog.

"It was just extremely bizarre behavior that I'd never heard of," he said Tuesday.

Littlefield said he screamed and cursed at the whale during the attack, terrified that the orca would pull the boat under water when it kept twisting the anchorage line around itself.

Littlefield's son videotaped part of the encounter, which lasted a few minutes before the whale swam away. No one was hurt.

"I was pretty much in shock," Littlefield told the Daily Sitka Sentinel. "I couldn't believe it was actually happening."

Albert Duncan of the National Oceanic and Atmospheric Administration said Littlefield notified the agency and provided video of the encounter.

Duncan said such attacks are rare and said Littlefield did the right thing by trying to remove himself and his boat from the situation, the newspaper writes.

"It's very rare," Duncan said. "With killer whales there has never been a recorded incident with a fatality in the wild."