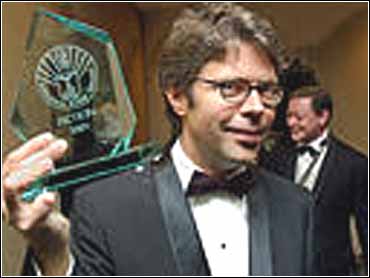 Having the Oprah logo on his novel made Jonathan Franzen so uncomfortable it helped get him kicked off her show. Having a seal that states he won the National Book Award apparently makes him quite content.

"It's a great honor," a smiling Franzen said Wednesday night after receiving the fiction prize for his acclaimed bestseller "The Corrections."

Other finalists for fiction included Louise Erdrich for her novel "The Last Report On The Miracles at Little No Horse," the story of a missionary priest who ministers to an American Indian tribe, and Jennifer Egan's "Look at Me," the author's second novel.

Franzen's novel, a 500-page chronicle of the life and times of an unhappy Midwestern family, was published this fall to rave reviews and immediately became the year's most discussed work of literary fiction.

But attention soon shifted from "The Corrections" to Franzen himself. Five years after lamenting in an essay for Harper's magazine that authors can't get people angry any more, Franzen proved they could - just insult Oprah.

Winfrey made "The Corrections" her September book club pick, virtually ensuring hundreds of thousands of sales, but Franzen sounded less than grateful in subsequent interviews. He worried about his place in the "high-art literary tradition" and complained the Oprah logo on his book cover amounted to a "corporate" endorsement.

Winfrey responded by canceling the dinner she traditionally hosts for a chosen author. Fellow writers such as Andre Dubus III and Thom Jones called him an elitist, and journalists and publishing insiders speculated that his chances for winning the fiction prize had been severely diminished.

"It's been a bad couple of months here ... a terrible time," Franzen said in his acceptance speech Wednesday, referring to the Sept. 11 attacks, although making some wonder if he meant his own public trials.

"I feel as if I was the person who provided some bloodsport entertainment for the literary community," Franzen joked later. "I was very happy to provide the service."

In the nonfiction category, Andrew Solomon won the prize for "The Noonday Demon: An Atlas of Depression," an examination of the disease, published by Scribner.

The stunned author asked "Is this happening?" as she accepted the award.

Steve Martin, the actor and writer who hosted the awards ceremony, joked to an audience of authors, editors, and publishers that the prize is the "most prestigious and respected acknowledgment a book can receive and still be unknown."

Meanwhile, playwright Arthur Miller, 86, author of such well-known plays as "Death Of A Salesman" and "The Crucible", was awarded the National Book Medal for Distinguished Contribution to American Letters.
Previous winners of the medal include authors Saul Bellow, Toni Morrison and John Updike.

Franzen received a few boos as awards host Steve Martin read down the list of finalists, and the applause was polite when fiction judge Colin Harrison announced he had won. But after Franzen had concluded his speech, in which he thanked Winfrey for her "advocacy" of reading and called books "the most lovely things human beings make," the response was warm and sustained.

In his opening monologue, Martin had teased Franzen, saying that instead of the Oprah show he would appear on "Martha Stewart's Good Morning Wisconsin."

Officials had emphasized that the books, not the authors, should be evaluated. "I always say to the judges, 'Keep your eye on the ball,"' said Neil Baldwin, executive director of the National Book Foundation, which sponsors the awards.

Franzen probably didn't need the $10,000 prize he received Wednesday night. His novel was a bestseller before Oprah's citation and film rights to Hollywood producer Scott Rudin had been optioned. According to his publisher, Farrar, Straus & Giroux, 780,000 copies are in print and at least 50,000 more will come out because of the prize.

All the attention helped make money for Franzen, but not for the book foundation, which gets about half of its annual budget from the awards ceremony. Attendance for the $1,000-a-plate benefit was down 20 percent from last year, to between 650 and 700, as publishers, looking to cut costs in a weak economy, either didn't attend or sent fewer people.

"We're going to have a look at the rest of the year and re-evaluate what we were going to do," said Baldwin, whose nonprofit organization runs numerous literacy outreach programs.

Wednesday night's ceremonies were marked by repeated reminders of the destruction of the World Trade Center. A silent art auction, organized by a group of children's book publishers, was held to support relief efforts. Wolff confessed she had been unable to write since Sept. 11, but was inspired by a recent visit to Ground Zero. Solomon, whose book is about depression, declared the "mental health of the nation" was being challenged.