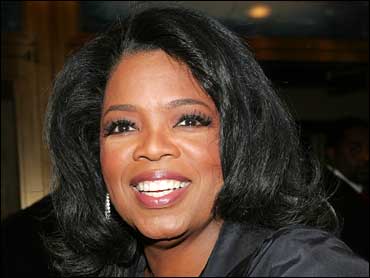 Some 500 people crowded into a community center in the eastern city of Grahamstown after being told that they had to make a simple payment of $1.40 with the promise of then receiving $168 per month for 10 years. Police said Winfrey knew nothing about it.

Authorities who went to the community center Thursday after hearing locals boast about their pending windfall were shouted at and told to go away, the South African Press Association reported Friday.

"This process is believed to have started earlier this week," Mali Govender told SAPA. "By word of mouth, the community was informed of this easy way of making money."

Scams are a frequent occurrence in South Africa; they are targeted mainly at the poor and uneducated. The latest one was apparently fueled by publicity surrounding Winfrey's brief visit to the country to interview prospective pupils for the Oprah Winfrey Leadership Academy for Girls.

At a ceremony Sunday, Winfrey selected all 73 girls aged 11-12 who had shown up for interviews. More children from other parts of South Africa will be chosen later this year.

The academy, which is to open in January, has the blessing of South African education authorities, who donated the site south of Johannesburg. The Oprah Winfrey Foundation contributed $10 million.

"It is a positive thing for South Africa," said local education department spokesman Lusufi Banyaza. "We used to have private schools denying access to the poor on cost grounds. Now girls will be able to get access to quality private education."

South Africa's education system still suffers from the legacy of apartheid. Private schools have top-class study and sporting facilities but are still dominated by the white minority because they are too expensive for many black and mixed-race South Africans.

Many state-funded schools, especially in the sprawling townships that sprung up under white racist rule, are hopelessly overcrowded and lack even basic supplies such as books.