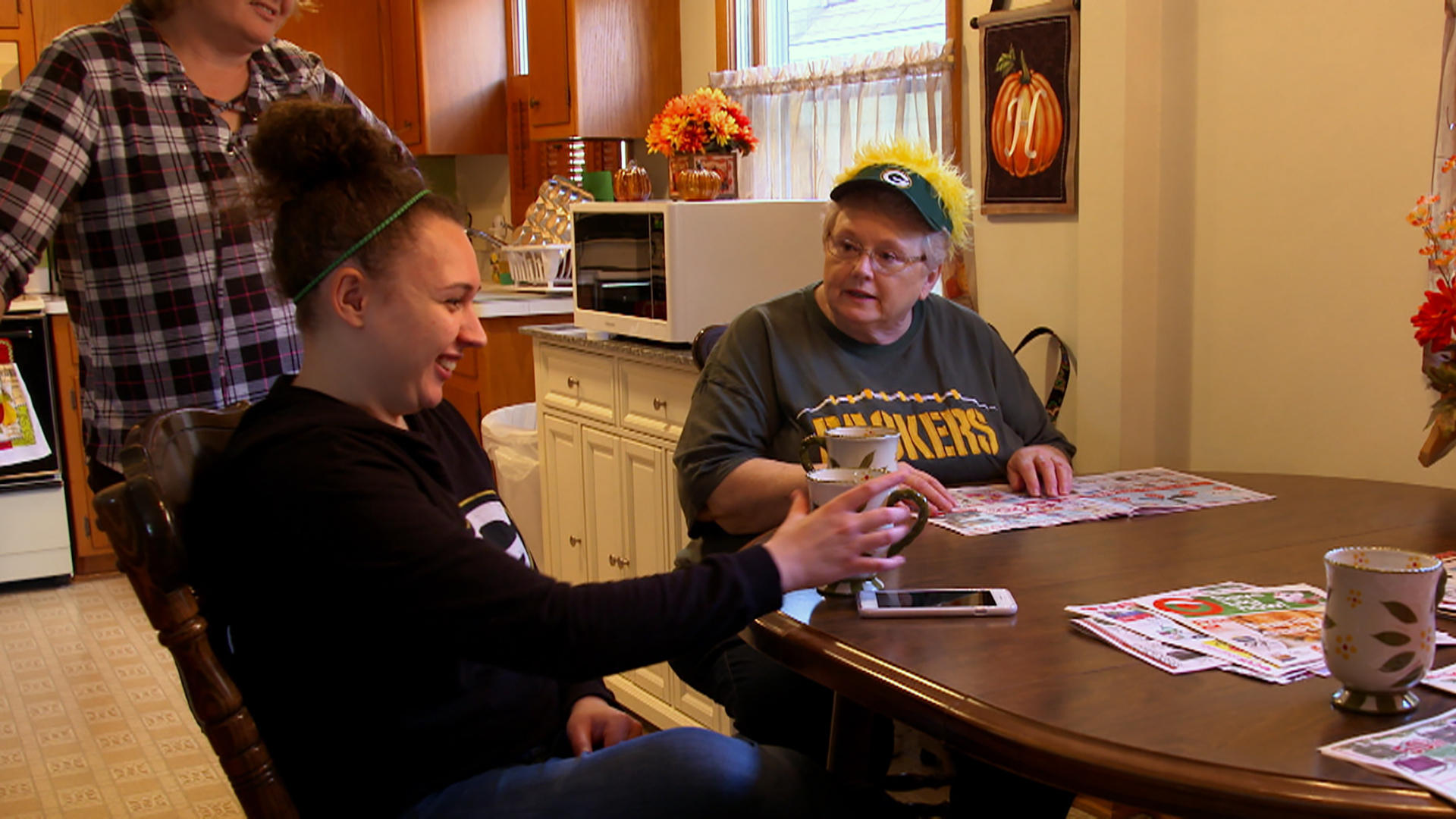 In 1850, a Catholic orphanage called St. Aemilian was founded in Milwaukee, Wisconsin to take in children whose parents had died in a cholera epidemic. 168 Years later, that same organization -- now known as "SaintA" --  is still finding shelter for thousands of children who need it, often kids who have deep trauma in their young lives, and helps those kids with a revolutionary approach that's spreading across the country.

No longer a residential orphanage, SaintA primarily places orphaned, abandoned, neglected and abused children in foster homes, and then coordinates their care. On any given day, it's looking after some 2,000 children, almost all of whom are part of a 21st century epidemic of childhood trauma.

Alisha Fox: I got diagnosed with post-traumatic stress disorder when I was 15.

Milwaukee resident Alisha Fox was given that PTSD diagnosis seven years ago, months after she somehow found the courage to tell her grandmother – and then the police – of the terrible trauma she had been enduring.

Alisha Fox: For ten years, when I was four to 14. I'd been sexually abused and raped by my father.

Alisha's father and mother split up even before she was born. Her dad eventually got custody because her mom had a drug problem, and he then hid his crimes from everyone for a decade.

Alisha Fox:  So during that whole time, I wasn't a person. You know? I wasn't anything. I wasn't even my own property. I didn't own myself. Somebody else did.

Oprah Winfrey: I can tell by the way you can speak about it, when you can say, "This thing happened to me from four to 14," that now there's been a clearing for you.

Alisha Fox: Right. Most people think that, you know, "Oh, she's damaged," or like, "Oh, she's not gonna be okay," but at the end of the day I think that I'm a survivor.

Oprah Winfrey: And every time you tell it, it makes you a little stronger.

Alisha's survival was not a sure thing. Her father went to prison for his crimes against his daughter; she went to live with her maternal grandmother and aunt, Bonnie and Michelle Hahn.

Oprah Winfrey: What did you think the first time you heard her described as suffering from PTSD?

Bonnie Hahn: I didn't understand it because PTSD was for the veterans coming home from the war. That was what I thought it was. I had no idea.

Tim Grove: At the time, she was acutely suicidal.

Tim Grove is clinical director at SaintA, and he took responsibility for Alisha's care.

Tim Grove: We might not be able to ever prevent the stuff that happens to kids. But we are fully in charge of how we respond when we see it.

"That very same sensitivity that makes you able to learn language just like that as a little infant makes you highly vulnerable to chaos, threat, inconsistency, unpredictability, violence"

For Alisha, like every child who comes to SaintA now -- they responded with an approach called "trauma-informed care," which focuses on a person's experiences before trying to correct their behavior, whether it be juvenile delinquency, poor performance in school, or out-of-control anger.

Oprah Winfrey: It comes down to the question of not, "What's wrong with you? What's wrong with that kid? Why is he behaving like that," to, "What happened to you," which is a very different question.

Tim Grove: It's so subtle and yet so profound in terms of how kids experience an adult that approaches them from that angle. They--feel safe.

Alisha Fox: I felt that somebody understood. That they knew where I was coming from. That it wasn't just another person just tryin' to talk to me to calm me down for that moment. That they had done their homework and that they really wanted to help.

A crucial element of trauma-informed care is something called the "ACE test." ACE stands for adverse childhood experiences.

Tim Grove: Ten questions primarily taking a lens and looking at sort of the family home and saying to adults looking back at their childhood, "Were you physically abused? Were you neglected? Did someone go to prison?" Ten questions categorizing adversity that kids face.

Alisha Fox: I did a ACE test for them, and I scored a nine out of ten.

For anyone, a high score on the ACE test is a powerful predictor of physical and mental problems down the road. According to the Centers for Disease Control, it makes you five times as likely to be depressed and can cut your overall life expectancy by as much as twenty years.

The CDC says this isn't theory, it's scientific fact, backed up by hundreds of published studies. And, the CDC says, one out of every eight children suffers enough trauma to cause lasting damage.

Dr. Bruce Perry: If you have developmental trauma, the truth is you're going to be at risk for almost any kind of physical health, mental health, social health problem that you can think of.

Dr. Bruce Perry may be the world's leading expert on childhood trauma. He has treated thousands of children, and been called on for decades to treat kids traumatized in high-profile events including the Columbine and Sandy Hook school shootings. He's a psychiatrist, and also has a Ph.D. in neuroscience.

Dr. Bruce Perry: That very same sensitivity that makes you able to learn language just like that as a little infant makes you highly vulnerable to chaos, threat, inconsistency, unpredictability--

Dr. Bruce Perry: --violence. And so children are much more sensitive to developmental trauma than adults.

Oprah Winfrey: So if you're a child who's raised in a nurturing and well-cared-for environment, you're more likely to have a well-wired brain?

Oprah Winfrey: And if you're a child who's raised in an environment of chaos, of uncertainty, of violence, of neglect, you are being wired?

Dr. Bruce Perry: And-- and typically in a way that makes you more vulnerable.

Oprah Winfrey: For just functioning in the world.

Bruce Perry travels the world teaching the techniques of trauma-informed care to therapists, educators, social workers and foster care agencies. It's crucial, he tells them, to understand what has happened to traumatized children before trying to "fix" their behavior.

Dr. Bruce Perry: "You need other tools in your toolkit."

Tim Grove heard Perry speak at a conference 10 years ago, and almost immediately began incorporating the Perry approach at SaintA.

"Really it boils down to something pretty simple. And it's relationships."

Tim Grove: We started to train our staff. And what our staff came back to us and said was they said, "We're starting to get this and we're seein' some remarkable things happen, but you gotta work on that teacher. You gotta work on that cop who just came and screwed everything up." And we said, "Okay."And 10 years later, 50,000 people have gone through our curriculum and been--

Tim Grove: --trained by us.

Among those trainees, all the teachers at a "trauma-sensitive" charter school operated by SaintA.

SaintA now works with the Milwaukee Police Department's trauma response unit, and with judges in the city's childrens court.

What the judge now knows is to ask a child "what happened to you?" Before asking "what's wrong with you?" SaintA repeats that mantra to any Milwaukee organization that will listen.

Belinda Pittman-McGee: I got involved with SaintA's and the director over there, Tim Grove, and he says, "Belinda, you've been doing this all along. There just never was a name attached to it."

For the last 23 years, Belinda Pittman-McGee has been running the Nia Imani Family Center.

Oprah Winfrey: I notice the chores board. So there's order and responsibility.

Providing transitional housing for homeless women and their children. The chaos of homelessness is itself a traumatic experience.

Belinda Pittman-McGee: I couldn't help anyone if I didn't go back and learn about what happened to them. What they didn't know was to understand, "Why am I the way that I am?"

Oprah Winfrey: "Why can't I control my impulses? Why am I so aggressive?"

Oprah Winfrey: "Why does the first thing that happens, somebody irritates me and I blow up--"

Belinda Pittman-McGee: That's right. I blow up, I wanna fight.

Oprah Winfrey: "I wanna fight." Yeah, Yeah. So you help them put the pieces together--

Belinda Pittman-McGee: Put it together.

Oprah Winfrey:  --for their stories?

Oprah Winfrey: To understand why I am this way.

Belinda understands trauma because she has lived through trauma. More than 30 years ago, she fled an abusive marriage with her three children.

Belinda Pittman-McGee: I got the children and we left.

She and her children walked to a shelter for abused women.

Belinda Pittman-McGee: The first week I was there, we were all outside, kinda go-- gonna go about our day and I heard a mother says, "Okay, I'll see you back at home tonight." I thought, "Home? She callin' the shelter home." That blew me away.

Belinda Pittman-McGee: I used to sit around a table just like this, just like this. So, I know life can be better if that's what we truly want.

Nia Imani's residents gather in the building's basement almost every evening for group learning and discussion facilitated by staff members who've been through training with SaintA.

There is a lot of pain in this room. Most of the women are on public assistance, and Belinda says that 90 percent of the men who fathered their children are incarcerated.

Woman at Discussion: Well, he get out next year. And he like, "Y'all there, come back." Like, I don't wanna go back. Like, it's the first time in my life, like, I feel like I'm doin' somethin' and I'm doin' it because I wanna do it. And I'm happy with that.

They'll work it out, she says, by first understanding their own trauma and then, in her words, "re-scripting" their lives…and the lives of their children.

Oprah Winfrey: You know, people talk about this cycle of poverty, the cycle of joblessness, homelessness, incarceration. Can those problems be solved without addressing trauma?

We first learned of the trauma-informed care happening in Milwaukee from a series in the local newspaper, the Journal Sentinel. It was titled "A Time to Heal," and there's a lot that needs to be healed in Milwaukee; it's one of the poorest cities in the nation. And something else drew us to Milwaukee: it's the city where I grew up.

Dr. Bruce Perry: Really it boils down to something pretty simple. And it's relationships.

Dr. Bruce Perry: Absolutely. Somebody helped you pull up those boots.

For the women at Nia Imani, that "somebody" is Belinda Pittman-McGee. For Alisha Fox, who's now in college, it's SaintA, her aunt, and her grandmother.