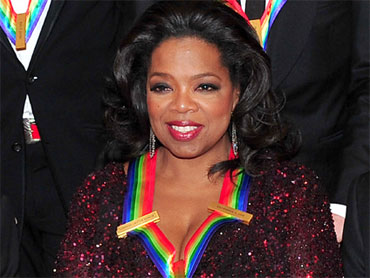 The Kennedy Center Honors is the quintessential American award for a lifetime of artistic excellence. On Wednesday morning, "The Early Show" kicked off a series profiling this year's honorees.

Among this year's honorees is the one and only Oprah Winfrey, who recently sat down with our Julie Chen for an exclusive interview.

Winfrey, named the world's most powerful celebrity four times, is now a 2010 Kennedy Center honoree. She is being honored along with Paul McCartney, Merle Haggard, Jerry Herman and Bill T. Jones.

Oprah told Chen, "I, you know, understood deeply what it meant to get this award. It is huge, when I think of myself -- on welfare, being raised by a single mother, living in this two-room flat, the only decoration on the walls were posters of Paul McCartney, and me dreaming of one day being able to actually see The Beatles and get to say hello to Paul. I -- Then I went to maybe, 'Once he sees me, he'll wanna marry me.' So it's completely full circle. You can't even imagine for me what it means to be in the Paul McCartney class of the Kennedy Center."

Chen reported that circle began in the backwoods of Mississippi where she was raised in poverty by her beloved grandmother, Hattie Mae.

Oprah told Chen, "I have my grandmother to thank for me being the essence of who I am, a belief that if you worked hard and proved yourself to be excellence, that excellence would follow you."

Chen said, "It was when you were a little girl in church that you were first told that you were gifted. Did you even know what that meant?"

Oprah answered, "No, I didn't know what that meant. But, you know, my grandmother raised me in the church, and I always say that my broadcasting career began there. And so as I'm speaking, 'Out of the night that covers me, black as pit from pole to pole, I thank whatever gods there be for my uncongruable soul.' I'm 6 years old. I don't know what the hell I'm saying, but it sounded good. And people would say, 'This child is gifted. This child sure can talk.' So that was the beginning, really, of me feeling comfortable speaking in front of people."

Sadly, her grandmother passed away a short time later, and 6-year-old Oprah was sent to live with her mother in Milwaukee. Years of pain and abuse followed. Her last chance was a father she hardly knew in Nashville. He taught her the importance of an education and gave her the confidence to flourish.

Chen said, "You were still in college while working in radio, and you got offered a television job in local TV. And you turned it down."

"You know what, Julie?" Oprah said. "I was in my -- I was in scenic design class with Mr. Cox. And I'd gotten the phone call for the third time, from the local CBS affiliate. And I went back into class and Mr. Cox said, 'Who was that?' And I said, 'Oh, that's Chris Clark. That's the third time they've called me from CBS and wanted to know if I wanted to do this TV job.' And Mr. Cox said, 'And you told them yes.' And I go, 'No, 'cause I have to finish all my classes.' And he said -- and I'll never forget -- he goes, 'That is why you're goin' to class, fool, so that CBS can call you, fool.'"

Oprah found a job at the anchor's desk -- but not her passion.

"What I realized in all of those years of preparation in news is that that wasn't what made my heart sing," she said. "What made my heart sing was being able to be myself. My interest and my energy flowed better from the time that I got fired as a newsperson and was put on the local talk show in Baltimore. That was freedom for me."

That freedom led to a phenomenon.

"I realized it was big," Oprah said of her early career. "I always believed it would be successful."

Chen asked, "But, did you ever think it would get as big as it got?"

"I feel like that -- that show became bigger than me," Oprah said. "It became and is as big as every single person who contributed to its success. It became and is as big as every audience member who ever decided that 'I'm gonna go back to school.' Every woman who ever watched a show about battering and said, 'I will no longer allow myself to be beaten.' Every person who ever hit their kid who said, 'I won't hit my children anymore.' It'll be everybody who ever lose weight. I'm happiest when I'm doing shows that I know people are going to be brought some light into their lives, where there's gonna be a sense of 'I never thought of it that way before.' That makes me really happy.' And I'm happiest on a movie set. Movie set feels like a vacation to me."

But, Chen pointed out, Oprah grew up wanting to be an actress.

Eventually Oprah opened Harpo Studios, becoming the first woman to own her own television and film company, telling stories she believed in. And after 25 years as a pioneer, America's best friend, inspiration, and "favorite thing," she is about bring an end to "The Oprah Winfrey Show."

Oprah told Chen, "When I return in January, I will have 67 shows remaining. But who's counting?"

"No," Oprah said. "It sounds like 'Woo-hoo!' Not only do I see the light at the end of the tunnel, the light is coming all the way through the tunnel and there's a little hula dance at the end. Although, I think I'm gonna have to comfort my best friend, Gayle, who calls me, you know, every now and then and goes, 'God, it's so sad. It's so sad.' I go, 'What are you talking about? I've been doing it for 25 years. What's sad about that?' She goes, 'But it's so sad. Aren't you sad?' No, I'm not. I'm not sad."

So how is she?

You can see the complete Kennedy Center Honors on Tuesday night at 9/8 Central on CBS.