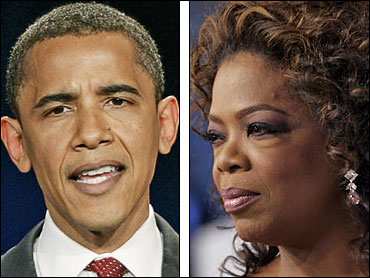 The most powerful woman in show business celebrated her favorite candidate with a private gala fundraiser at her palatial estate in the coastal enclave of Montecito, just south of Santa Barbara.

Stevie Wonder was scheduled to perform for the guests, who are expected to include Will Smith, Jamie Foxx and Halle Berry.

Visitors were bused to Winfrey's secluded home from an equestrian center about 10 miles away. A solid line of limousines, BMWs and Bentleys - interrupted by, yes, a few fuel-efficient Priuses - disgorged well-dressed guests, a few sporting stiletto heels despite official instructions to wear flat shoes for walking on Winfrey's meadow.

Visitors were subjected to strict security procedures and relieved of cameras and recording devices. Instructions sent to guests noted that Winfrey and Obama would not be accepting gifts.

Earlier in the day, the Democratic presidential contender made a quick lunchtime stop before the party to speak to a crowd of about 1,000 eager supporters who gathered on a hillside overlooking the sparkling blue Pacific at Santa Barbara City College. It was his only public appearance of the day.

Obama arrived wearing his trademark white shirt with an open collar and rolled-up sleeves, shaking his way down a line of outstretched hands as the song "Ain't No Stopping Us Now" blared from speakers.

He spoke for about 20 minutes, hitting his core themes of optimism and accountability.

"What's called for is a level of responsibility and seriousness that we haven't seen in a very long time," he told the cheering crowd, which ranged from college students in short sundresses and big sunglasses to older couples decked out in peace symbols.

A woman standing in front of the stage appeared to faint as Obama spoke about Iraq. The candidate paused and asked the crowd to make way for firefighters.

One supporter shouted, "You're a good man," leaving Obama momentarily at a loss for words.

"Well, I'm not the only one stopping to help her," he said, sounding almost embarrassed.

He talked briefly about his last trip to California in August, when he spent a morning helping a home health care worker clean a house, wringing out mops and making breakfast through a program sponsored by SEIU, the Service Employees International Union.

"Listening to her talk about the hardships of her life, talking about her struggles without a trace of self-pity ... I thought, there is the essence of what America is about, this generosity of spirit," Obama said.

Then it was off to a private luncheon and on to Winfrey's cocktail-hour shindig, where a different brand of very American generosity would be on display.

The party was expected to raise $3 million for Obama's campaign. Tickets to the event, which is sold out, went for $2,300 apiece, keeping them within campaign finance limits.

"This is much more than a fundraiser," Marty Kaplan of the University of Southern California told CBS News Correspondent Bill Whitaker. "It's an attention raiser. That's what stars can contribute more than money is the limelight to a candidate."

Obama has raised more than $58 million for his White House bid. Forbes magazine estimates that Winfrey, the Chicago-based talk-show host, is worth about $1.5 billion.

Obama already enjoys the support of Hollywood moguls like David Geffen and Jeffrey Katzenberg, and Winfrey's fundraiser is another chance for him to tap into money in California, which was his top donor state from April through June with a total take of $4.2 million.

Winfrey is a well-known fan of Obama, calling him "my favorite guy" and "my choice" on CNN's "Larry King Live" last year before he announced he would run for president.