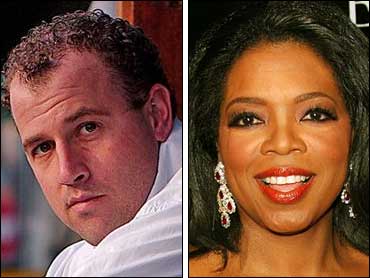 Oprah Winfrey challenged author James Frey over his disputed memoir, asking him on a live telecast of her show Thursday to explain why he "felt the need to lie."

"It is difficult for me to talk to you because I really feel duped ... but more importantly I feel that you betrayed millions of readers," Winfrey said to Frey, who wrote the hugely popular "A Million Little Pieces."

Frey's story of substance abuse and recovery became one of the best-selling books of 2005 after Winfrey named it to her book club last fall, with countless addicts citing it as inspiration.

"A Million Little Pieces" was published in 2003. It enjoyed good sales, and when Winfrey named it as the September 2005 choice of her book club, it became one of the best-selling books of last year.

But on Jan. 8, The Smoking Gun Web site ran an investigative story that indicated Frey, 36, had embellished, and even invented, some of the material in his memoir.

Winfrey reaffirmed her support for the book in a telephone call to CNN's "Larry King Live" on Jan. 11 at the end of King's hour-long interview with Frey.

In the call, Winfrey dismissed as "much ado about nothing" the allegations that Frey had fabricated some parts — including a three-month prison stay that apparently never happened.

"What is relevant is that he was a drug addict ... and stepped out of that history to be the man he is today and to take that message to save other people and allow them to save themselves," Winfrey said in her surprise call.

But Winfrey, who has been widely criticized, even by e-mailers on her Web site, for her apparent indifference to the controversy, said Thursday that she regretted making that call.

"I left the impression that the truth is not important," she said.

Frey acknowledged to King that he had embellished parts of the book, and he told Winfrey Thursday that the same demons that fueled his addictions caused him to mischaracterize himself.

"I made a mistake," Frey told Winfrey on Thursday.

In his interview with King, Frey said he had originally tried to sell his book as fiction.

In a telephone interview with the New York Observer, Talese said it was never her intention to publish the book as a novel.