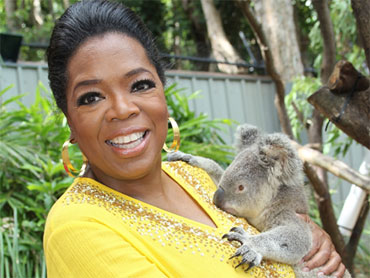 Oprah Winfrey joined 300 eager audience members Wednesday in Australia, where they were flown in for an action-packed, Down Under adventure including close encounters with kangaroos, surfing lessons and a journey to the remote and dusty Outback.

Winfrey kicked off her 25th and final season of "The Oprah Winfrey Show" in September by surprising her audience with one of her biggest giveaways ever: an eight-day trip to Australia. Audience members were hand-picked by Winfrey's staffers, who considered them the program's most loyal viewers.

Winfrey landed in the northeast coastal city of Cairns where her jet refueled before flying to Hamilton Island, on the Great Barrier Reef, to join some audience members awaiting her arrival. The audience arrived from the U.S. on Tuesday.

On the tropical resort island, Winfrey drove a golf buggy to a wildlife park where she enjoyed the sights of Australian native fauna and cuddled a koala.

"I have been here one hour and I've seen two koalas mating already," Winfrey told Ten Network television on the island.

She along with 90 audience members will have a barbecue dinner cooked by Australian celebrity chef Curtis Stone on Wednesday before flying on Thursday to Uluru, Australia's famous red sandstone monolith in the central Outback, which is also known as Ayers Rock, Ten reported.

"The reason why I wanted to go to Uluru - Paul Simon called me and said 'you must.' He said 'not to be missed,'" said Winfrey, referring to the U.S. singer and songwriter.

She apologized to fans who had gathered at the Cairns airport, hoping in vain to catch a glimpse of the talk show queen. She said Australian customs officials had refused her permission to leave her plane.

Jodie Price said Winfrey's arrival was more exciting than a visit from the royal family.

"I'll tell you what, I would not get out of bed at six in the morning to come see the Queen," she said.

Australia's tourism minister has unveiled some details of the top-secret itinerary for "Oprah's Ultimate Australian Adventure," which will take Winfrey's lucky chosen to every corner of the continent.

The audience, which ranges in age from 18 to 75, has been split into several smaller groups and are being dispatched to explore the country's wine regions, visit a historic prison colony in the island state of Tasmania and snorkel along the Great Barrier Reef. They'll take surfing lessons, chow down at traditional Aussie beachside barbecues and hike through the Blue Mountains west of Sydney.

Some audience members will also visit Uluru while others will venture into the crocodile-infested rainforests of the north.

Audience members cried, clapped and giggled with glee as they were ushered through Sydney airport on Tuesday. They were quickly whisked by bus to a downtown hotel, where they were greeted with a traditional Aboriginal dance performance and given their itineraries for the week.

"It's an unbelievable experience, and I just want to soak in every bit of it," said Jocelyn Kelley of Boston, who was traveling with her mother, Gloria. "To be in that audience, to be a part of something so big, is just amazing."

Winfrey will film two episodes at the Opera House (which the Australian media has renamed the "Oprah" House) and a third episode at a yet-to-be disclosed location, rumored to be somewhere in the Outback. The shows are scheduled to air in January.

Australia is paying more than $4 million for the trip between federal and state governments, but officials insist the publicity generated from the show will bring in many millions of dollars of tourism advertising.

"Oprah is a household name, not just in the United States but in the 145 countries where the show is broadcast," Federal Tourism Minister Martin Ferguson said in a statement. "That Oprah has chosen Australia as her Ultimate Adventure destination sends a powerful message to her millions of fans around the world."