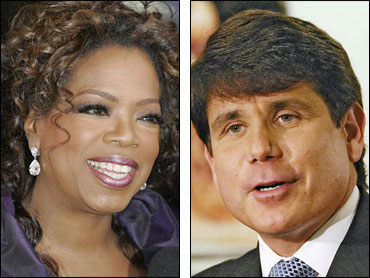 The impeachment trial of Illinois Governor Rod Blagojevich started Monday in Springfield. But rather than facing state senators, Blagojevich will be in New York, talking to Whoopi Goldberg and Larry King.

During his press tour, Blagojevich revealed he had considered naming Oprah Winfrey to the U.S. Senate.

The embattled governor told ABC's "Good Morning America" that the idea of nominating the talk show host came to him as he explored potential candidates for the job that federal prosecutors allege he tried to sell to the highest bidder.

"She seemed to be someone who would help Barack Obama in a significant way become president," he said. "She was obviously someone with a much broader bully pulpit than other senators."

The governor worried, though, that the appointment of Winfrey might come across as a gimmick and that the talk show host was unlikely to accept.

In an interview scheduled to air this morning, he told the "Today" show that he thinks "the fix is in," and he accused lawmakers of deciding "essentially to do a hanging without even a fair trial."

"You can conceivably bring in 15 angels and 20 saints led by Mother Teresa to come in to testify to my good character, to my integrity and all the rest. It wouldn't matter," Blagojevich said.

Also on his itinerary: an appearance on CBS' The Early Show on Tuesday, as well as "Good Morning America," "The View" and "Larry King Live."

"That's all we can do," Blagojevich attorney Sam Adams told CBS News. "That's all we have left now, is to let the people of the United States, of Illinois, know what is happening in Springfield."

It may seem an odd choice, playing to audiences who can't help save his job in this trial - or his freedom in his upcoming criminal trial.

U.S. Sen. Dick Durbin said Sunday that Blagojevich should be defending himself at the trial. "Barbara Walters is not on his jury," the Illinois Democrat said, referring to the "View" co-host.

But Bowers notes that Blagojevich is now getting advice from the same PR firm that represents former Bolingbroke Police Sergeant Drew Peterson, who was questioned in the death of one wife and the disappearance of another.

In recent days, Blagojevich has compared himself to the hero of a Frank Capra movie and a cowboy being lynched for a crime he didn't commit. He said that when he was arrested on federal corruption charges, he took solace from thinking of other jailed leaders - Nelson Mandela, the Rev. Martin Luther King Jr. and Gandhi.

In Springfield, state senators began hearing details of the criminal charges against Blagojevich. They're likely to hear recordings that allegedly reveal the governor talking about signing legislation in exchange for campaign contributions.

If he's convicted by state senators, they then have the option of banning him from state-elected office for life - the equivalent of a political death penalty.

With Blagojevich refusing to mount a defense, the impeachment trial could wrap up within days, ending a bizarre political and legal spectacle that began Dec. 9 with Blagojevich's arrest by FBI agents.

His arrest was the final straw for lawmakers, who had spent six years butting heads with Blagojevich. The House quickly voted 114-1 for impeaching the governor. That sent the case to the Senate, where it would take a two-thirds majority to convict Blagojevich and throw him out of office.

Whatever the Senate decides, the criminal case against Blagojevich, 52, won't be affected.

The more inflammatory tapes, which allegedly include an attempt to sell Mr. Obama's vacated Senate seat to the highest bidder, will be saved for the impending criminal trial.

Federal prosecutors said their wiretaps also caught Blagojevich threatening to withhold money for children's health care unless he got campaign donations from a hospital executive and offering to trade state aid to the Tribune Co. in exchange for the Chicago Tribune firing unfriendly editorial writers.

"I look forward to my day in court, and I expect to be vindicated," Blagojevich said Friday.

Despite some experts saying resignation might help Blagojevich with jurors in any future criminal trial, the governor says that's not an option.

"I'm not going to resign, of course not," he told The Associated Press. "I've done absolutely nothing wrong."